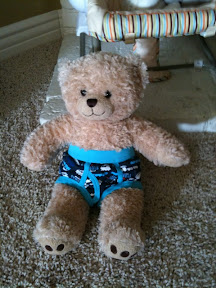 I've known for quite some time now that at some point I was going to have to deal with potty training. It was one of those things where just the thought of it would invoke fear in me.

I guess I was fearful because I didn't have a plan of action, a game plan, so to speak. I'm the type of person that always has a structured plan for things unknown. I do my research & establish a plan. Of course I'm usually flexible if the plan doesn't pan out as expected, but at least it's a starting point for me.  But I honestly didn't have a plan for such a thing as this.  And most people say that boys are much harder than girls, although I've seen plenty of people say that their boys were much easier than their girls, so I firmly believe that it depends on the child, not the sex of the child.

To further complicate matters I would see people talking about potty training & which method they preferred. But on the flipside my hubby kept insisting I didn't need to follow any "method", just let it happen when it happens was his motto. I kept trying to go with my hubby's game plan, but it made me very nervous I must admit.

At Lil J's last checkup at the doctor she asked me if I had started potty training & I told her no, & that I hadn't seen any signs of readiness yet.  She told me to be prepared to start soon, at least within the next 6 months (& this was 4 months ago!!!).  She shared with me her adventures of potty training her twin daughters.

In the past few months I have seen A LOT of people mentioning potty training on facebook. And they all were following a specific method. A lot of them have children close in age to my Lil J, so that was making me even more nervous.

I remember the first one I saw, they said Dr. Phil's method was amazing. I googled it, but really didn't like the sound of it. It said you needed to get a doll that pees & have your child potty train the doll. I suppose if I had a daughter I might give it a try, but since I have a son I didn't want to waste my money buying a doll.  I also just couldn't imagine this working with my son, based on his personality I mean.

Shortly after that I saw a whole bunch of people on facebook (mostly friends through MOPS) were potty training using the 3 day method. I was watching all the posts closely, intently.  I kept reminding myself that there is no real rush, I don't have daycare or anything else that has a deadline for potty training like some parents do.  I finally started asking questions about this method & one of my friends sent me the e-book that explains the whole method.

It's a 40 page e-book & I read it in about an hour.  I was intrigued to say the least.  It recommended doing it at 22 months of age & stated that some children (though not most) can do it even earlier than that.  What REALLY caught me my attention was the fact that it said it was MUCH harder to do if you wait until 30 months or later.  Lil J is almost 28 months already.  And I needed 3 full days of not leaving the house to do this.  So I had to do this while my stepson is out of school (so I'm not needing to leave the house to pick him up).  I had actually planned to do this LAST week, but then Lil J was sick (with the roseola virus), so I decided to postpone it a week until he was all better. 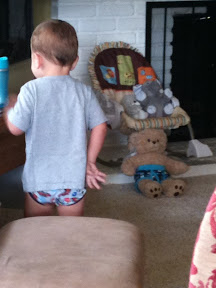 And so, as you can see in the photo, the 3 day potty training method is a go in my house.  (I even put undies on Osito in addition to Lil J!!)  I am currently on day 2.  It's definitely intense & challenging & demanding of your time & attention.  For people who can't dedicate a full 3 days of undivided attention to their child it's not a good choice.  It's pretty much an all or nothing deal.  You either follow it to a tee or don't bother.

I will, at some point, after completing all 3 days, either edit in the daily details here or (most likely) just publish a whole new blog with those details.  Right now Lil J is napping & I don't want to spend the whole time here on the computer, plus it's not finished yet, only half way there.
Posted by Frau Guten Tag at 8/10/2011 04:54:00 PM