I am using Heart of Dakota's Little Hands to Heaven, Teach Your Child to Read in 100 Easy Lessons, various forms of Spanish, & reading out loud of a chapter book.

This week focuses on the letter G, the number 8, & Moses.

On Monday I was excited to try out my new idea in regards to the reading lessons!  So we started our school time in prayer (I don't know if I've ever mentioned that before, but we ALWAYS begin our school time in prayer)  And then we did our fingerplay.  THEN I pulled out the reading lesson--to do the words.  Lil J immediately started crying uncontrollably.  I couldn't believe it.  I asked him WHY he was crying & he wouldn't give me an answer.  His attitude was terrible--he was being outright defiant & disrespectful.  I sent him to his room, telling him when he was ready to change his attitude he could come out.  About 5 minutes later he came out, apologizing & said he was crying because he was starving!  It was 11:30, which is a little early for lunch for us, but sometimes we eat as early as noon.  He said he wanted to eat egg.  I served him a 2 egg omelette & a bowl of vanilla goat yogurt.  He must've REALLY been starving because he inhaled all of it!!  I went ahead & had some soup for my lunch at this time.

Once Lil J was done inhaling eating we started all over again--praying, fingerplay, then came reading the words (lesson #78).  It went very smoothly with no difficulties or issues.  Then we read about Moses in the Bible--the last of the plague, the death of the firstborn sons & Passover.  Then we did a math activity & discussed birth order in families.  He then practiced writing "G" & "g".  He was getting artistic with "g", LOL.  Then we did 'count on me'--drawing 2 doors in each box & then counting them & basic addition adding them all up.  Then we did Spanish, then reading sentences (paragraphs).  At the last few sentences he was starting to lose his focus.  I just cheered him on & he did it.....this plan was great today, I sure hope it stays that way.  Then we listened to our songs--the Exodus, books of the Bible, & God made the universe.  The Exodus is the last song on the first CD, but I went ahead & sang Books of the Bible & God made the universe without the CD.  Lil J had to run & get his drum for this, LOL!!  He asked me to get my guitar, but I didn't.  I don't know the chords for these songs or else I would've.  And then our final portion of school was that I read out loud of our new chapter book--The Black Stallion.  It has 18 chapters, so it should last us 3-4 weeks. 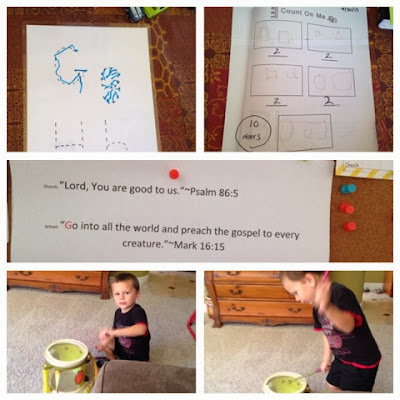 On Tuesday we continued with our fingerplay, then reading 'words' (lesson #78), then reading about Moses in the Bible.  Then we did our weekly devotional time, using both devotionals as usual.  Then I drew a big "G" on a sheet of paper & covered it in glue.  My son applied cotton balls to the glue G, making a "cloud G" as my son calls it.  Then we did some acting out of what we read in the Bible.  Then he read his 'sentences/paragraphs'.  Just like yesterday he started off great, but was struggling to focus on the last couple of paragraphs.  But overall I think splitting the reading lesson in half has really helped.  What a difference!!  No tears or attitude!!!!  Then we did Spanish & then our 3 songs.  And later we will do our reading aloud, at least one chapter in the Black Stallion. 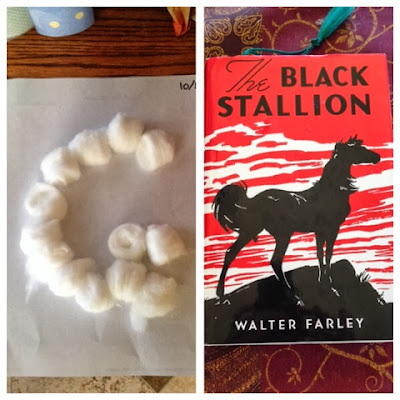 On Wednesday we continued with our fingerplay, read words in the reading lesson (lesson #78), then proceeded to read more about Moses in the Bible, but my son was having a fit that we weren't reading the sentences in the reading lesson......he didn't seem to understand that we were still going to do them, just later.  He was so upset that I had to send him to his room to cool off.  Once he came back, calm & ready to proceed, we continued--reading about Moses (leaving Egypt, being led by the pillar of cloud & pillar of fire).  We did some acting out of what we read in the Bible, although I chose to have his toys act it out rather than my son act it out (just for the purpose of maintaining calmness & focus).  Then he did "hide & seek G", which he's really good at.  Then he glued 8 pieces of jewelry to his #8 page (jewelry because as the Israelites left Egypt they were given jewelry & other gifts).  I used to glue these on for him.  Then the last couple of weeks I would put the glue on them & let him place it on the page.  But last week I finally bought some glue sticks (I usually use a liquid glue--either elmer's school glue or gorilla glue) which are less messy, so today I let him do the whole thing.  He was really proud of himself.  Then we read sentences, he nailed lesson #78 today, will be moving on tomorrow.  Then we did Spanish & an extra craft.  I like to do 2 extra crafts each week, but I was only able to find one that tied into this week's lessons.  So I actually made this craft up all by myself.  Since creativity is usually so hard for me I was pretty proud of myself. It's the pillar of cloud on one side & the pillar of fire on the other side. And my son knew exactly what it was based on what he learned today in school!  Then we did our songs--one about the Red Sea & our 2 usuals-books of the Bible & God made the universe.  Later we will read more in the Black Stallion. 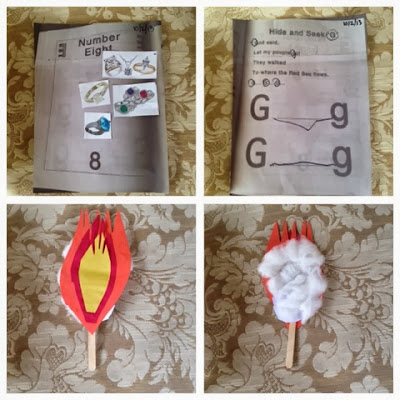 On Thursday we continued with our fingerplay, did the words portion of a new reading lesson (#79), read about Moses in the Bible, did masking tape G on the floor.  [My son has been asking for masking tape G since Monday, LOL!!]  We did some acting out & discussing of what we read in the Bible.  We did 2 crafts today--one that was part of the curriculum & an extra one that I added on.  They were both about the parting of the red sea--what we read about in the Bible today.  I am very glad I added on a craft because the one in the curriculum didn't work out & I had to throw it away.  It said to use "shiny white painting paper"; now me being so ignorant about craft stuff has no clue what that means.  A more technical name for it would've at least allowed me to have asked for help at the craft store.  But help is extremely hard to come by in Michael's, especially educated & knowledgeable help.  So I instead used my watercolor paper and it didn't work out. Then we did the sentences portion of the reading lesson--this was a bit of a struggle, lots of new words took more focus I guess & focus is hard for him, but he got through it.  Oddly the first half was the hardest part, whereas it's usually the second half that is hardest for him.  Usually he starts out full steam & then starts to wear out & grow weary about half way through.  Whereas today he started out slow & distracted & then seemed to get warmed up halfway through.  Then we did Spanish & our songs--the red sea, books of the Bible, & God made the universe.  The craft that didn't work out involved paint, so then Lil J was all into painting & kept on painting picture after picture.  I love to see him paint.  It's definitely an avenue that I want to encourage him in since he loves it so much & gets so into it.  Later we will read more of the Black Stallion.  Lil J isn't quite as into this book as he was James & the Giant Peach, but I'm hoping it will grow on him.  It is a more serious story than the peach was.  But I'm hoping he'll get into it & after we finish it we can watch the movie. 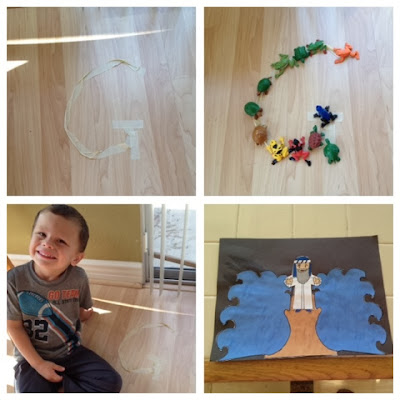 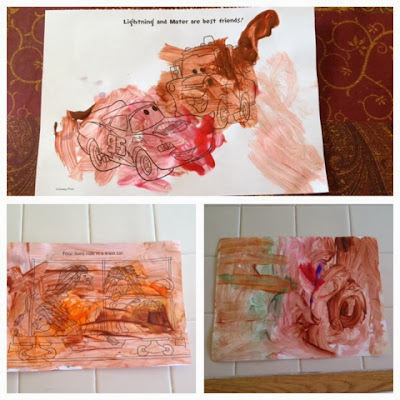 On Friday we continued with this week's fingerplay, we read the words in reading lesson #79, we read about Moses in the Bible (about manna & water from the rock), Lil J practiced writing "G" & "g" again & I went ahead & had him practice his numbers as well since I realized we hadn't done it yet this week.  We did some acting out & some discussing of what we read we read today.  Lil J collected "manna" off the floor into a basket & we discussed what it would be like to eat the same thing every day--although I think this was wasted on my son as he would be perfectly happy to eat the same thing every day.  Then Lil J read the sentences in his reading lesson & then we did Spanish & there was no song to correlate with today's lesson, so I just sang books of the Bible & God made the universe while Lil J hopped around on his hoppy ball.  Later we will read more in the Black Stallion.  He seemed a little more interested in it yesterday than he had been so far. 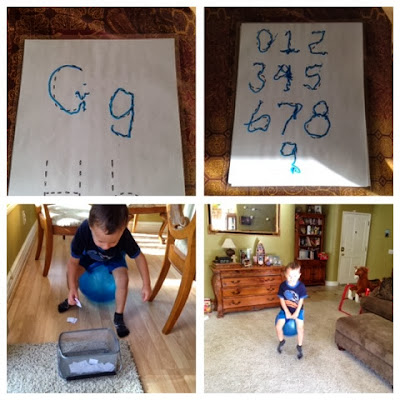 All in all it was a great week & Lil J is very excited to learn about the 10 commandments next week.