This week is a review week, focusing on letters A-L & on Solomon.

After taking a week off to focus on Thanksgiving, I must say I was quite eager to get back to our regular schooling.  My son seemed to feel the same way.  I had worried that time away might lead to him being more lazy about it or not wanting to do it, but that didn't seem to be the case at all I am pleased to report.

On Monday we started off the week with a new fingerplay.  I decided to read the Bible reading from both my own NKJV Bible as well as from Lil J's own Bible that came with the curriculum & I will continue to do so from now on.  This curriculum is written to be used with any Bible--it lists the Bible reading in a standard Bible as well as the 2 Bibles they offer with the curriculum (they offer 2 to allow you to choose which one best fits your child's age & abilities).  So I read out of my Bible & then out of Lil J's Bible.  Then there was a "math activity" where I had a pile of pairs of shoes & Lil J had to sort the pairs & put them together & tell me which was largest & which was smallest, etc. & also which pair of shoes belonged to who in our family.  I don't really see that as being math per se, but it still seemed like a good learning activity so I did include it.  The point of it was that Solomon was wise & knew how to match the baby with it's own birth mother (what we read about in the Bible today).  Being a review week, I had Lil J write all the review letters, A-L.  And then I had him write his numbers as well.  Then we did an activity where we draw a blue cloud at the top of the page, a red smiley face in the middle, & a yellow rectangle at the bottom, representing the temple Solomon built.  The cloud represented Solomon's dream, where God came to him in a dream.  Then Lil J read a Bob book, then we did Spanish, our songs (a song about Solomon, a song about Proverbs, & our usual 3), & then he colored a print out page about Solomon.  I seem to have reached an area in the Bible where it's really tough to find crafts to go along with it.  So I was able to find this coloring page on Solomon & I settled for that as an add on activity.  Later I will read aloud.  The reading of Little House in the Big Woods has been put on hold for now....I've been doing a lot of library books instead.  And since it's December now, I've started my tradition of reading a chapter of Luke each day, beginning on December 1st & I've been reading it aloud to my son this year. 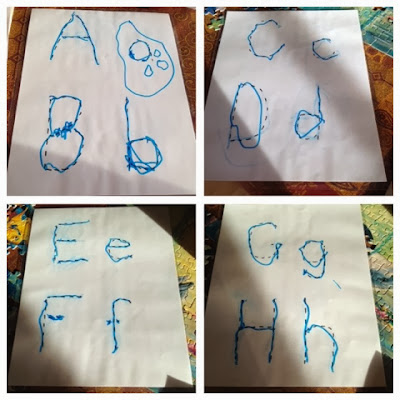 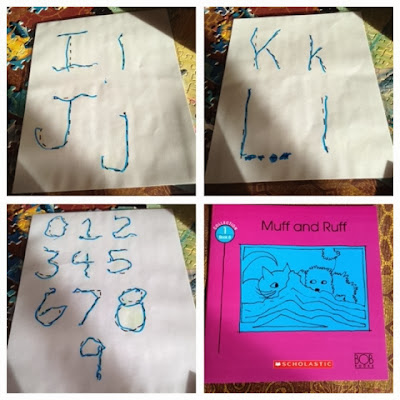 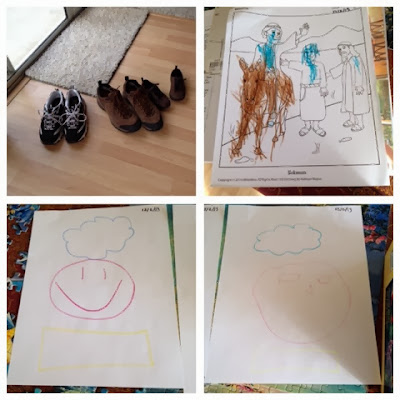 Bottom Left: my demo of what he was to draw  Bottom Right: his drawing

On Tuesday we continued with our fingerplay.  I chose this day to combine days 2 & 3 together to make a 4 day school week.  Yesterday seemed too busy to do so, so each week I will look for the lighter days to combine together.  We read about Solomon building the temple, we did a lot of discussing about what we read.  Being a review week I let Lil J choose what letter he wanted to decorate on paper (he chose A & chose to decorate with "o"s) & what letter he wanted as masking tape letter on the floor (he chose B).  Then he read a Bob book, we did Spanish, & our songs--a song about Solomon, a song about the temple, & our usual 3 songs.  All in all it was a very good day & I look forward to having Friday off!  There was an activity I skipped, building a temple out of food--it's in our curriculum & I had also found it when searching online for craft ideas.  I just have such a hard time with wasting that much food to do that.  I'm sure that's probably silly of me, but I just couldn't bring myself to do it.  I will read aloud later on today. 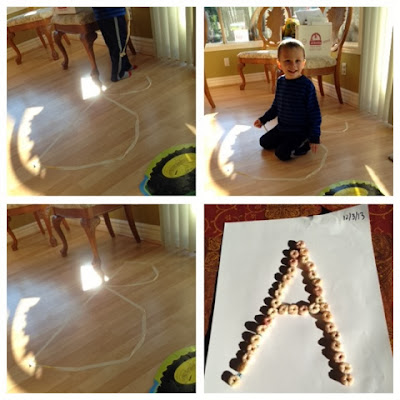 On Wednesday we continued with our fingerplay.  We read more about Solomon in the Bible.  We did letters I-L review in our devotional (for reviews I ONLY use ABC Bible Verses), he did Hide-n-seek Review.  He did Count on Me, drawing 2-3 crosses in each box & counting up each box & then all of them together.  He read a Bob book, we did Spanish, & then our songs--a song about Solomon, a song about the temple, & our usual 3 songs.  I will read aloud later today. 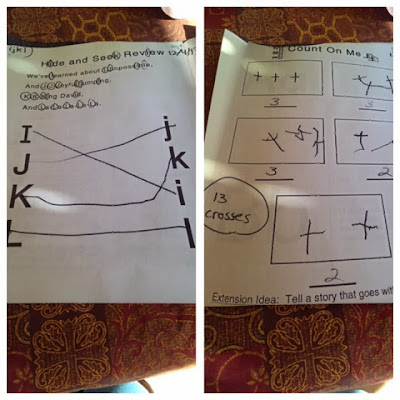 On Thursday we finished off the week with our fingerplay, we read about Solomon turning away from God, we did some acting out & discussing of what we read in the Bible.  Being review week he again wrote letters A-L & I had him write his numbers as well.  He read a Bob book, then we did Spanish, & songs--a song about Solomon, a song about Proverbs, & our usual 3 songs.  Later I will read aloud from something, as well as from Luke in the Bible, as the Christmas season is upon us.  I've been reading from Luke right before Lil J goes to bed & I love it.  He's so calm & still & it's so nice.  Anytime I read to him during the daytime he's running & wiggling or swinging on his swing, etc.  If I question him I find that he is listening, it's just distracting to ME when I'm reading & he's all over the place. 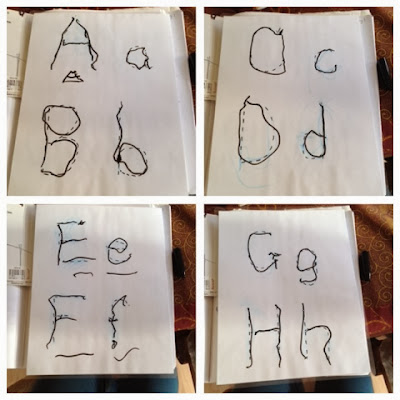 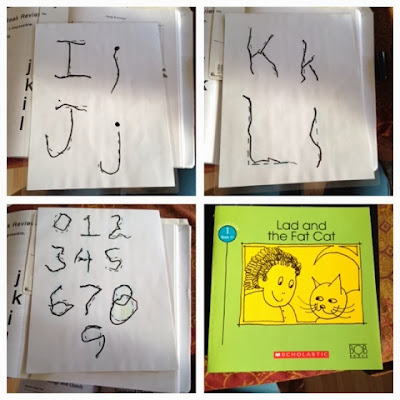