This week focuses on Elijah, Elisha, and the letter M.

On Monday we started off the week with a new fingerplay.  We read about Elijah in the Bible.  He read a Bob book.  He wrote M & m (& he wanted to N & n also).  He did 'count on me', drawing birds in each box (birds representing the ravens that fed Elijah).  We did Spanish & our songs--a song about Elijah & our usual 3.  This is still an area where I can't really find crafts that correlate, so I found a coloring sheet that went with today's Bible reading & he colored that.  I don't really mind though because I've been super busy with holiday stuff & finding crafts & doing all the prep work that goes along with extra crafts would be a bit much right now.  He's never really been into coloring, so I joined him on this one to help make it more exciting for him.  Later I will read aloud & I will for sure be reading aloud at bedtime from the book of Luke.  I have to say I really love reading to him at bedtime.  I think I will continue reading to him from the Bible at bedtime even when Christmas passes.  He is so calm & he really is listening, as he comments on certain things. 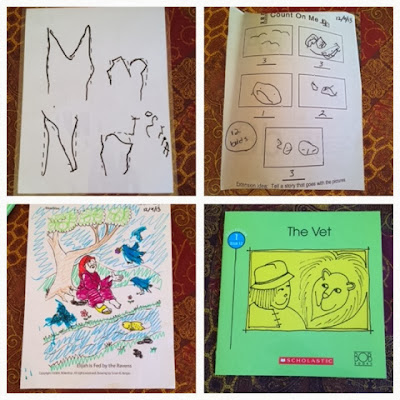 On Tuesday we continued with our fingerplay, we read in the Bible about God sending down fire for the sacrifice, Elijah being taken to heaven on a chariot of fire, & about the widow with the never-ending oil supply.  I combined days 2 & 3, to make for a 4 day school week.  We did a lot of discussing of what we read, we did masking tape "M" & a "bean M".  I left out a couple of things, but added on a worksheet.  He did Spanish & read a Bob book.  And we did music--a song about Elijah & our usual 3.  Later I will read aloud, probably from Christmas books, which I did yesterday, & then reading from Luke at bedtime.

Yesterday I sat down & went through the remainder of the school year (we are about half way through or close to it I guess, it's a 33 week curriculum) & pulled up coloring sheets to go with each week & printed out the "count on me" pages, the "hide & seek" pages, & "color" pages that are coming later on.  I organized them all by unit & day & put them in a folder.  It feels like such a weight off, knowing that it is all done & planned & I can truly just grab & go for the remainder of the school year.  I am also feeling burned out on crafts, but I think that may pass after some time off from it, & especially now that all the rest of the planning & organizing is completely done.  It now leaves me time to possibly find a craft & do all the planning & prep work involved.  But even if I don't return to doing crafts I still have lots of coloring sheets that I printed off the internet, to go along with what we are learning.  I am wondering if I should make sure I buy next year's curriculum early enough for me to do all of this before we begin, but I don't know that next year's will need this.  It looks like A LOT, so I don't think I'll be needing to add on extra stuff.  And printing pages out won't take all that long, if that is all that's needed. 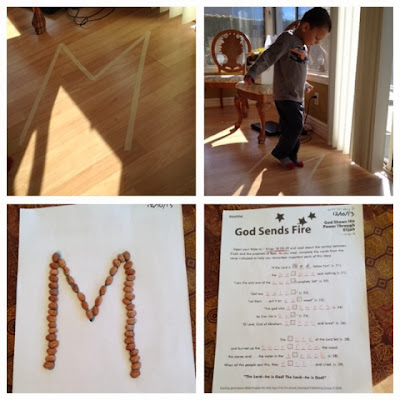 On Wednesday we continued with our fingerplay, we read about Elisha telling the leper to wash in the river 7 times to be healed.  He did 'Hide & Seek M'.  We did a drawing activity where I demonstrated & Lil J copied my demonstration on his paper.  There's been activities similar to this before & from what I recall they never made much sense to me, but this one I actually understood.  We were to draw red circles at the top of the paper--these represented the lepers sores.  Then we drew a river in the middle of the paper--this represented the river he washed himself in 7 times.  Then we drew a happy face at the bottom--this represented that the man was happy once he was healed.  Of course my silly son had to draw a happy face AND a serious face--because he might not have been happy ALL THE TIME he says.  Then he read a Bob book, & then we did Spanish.  And then we did our songs--no song to go with today's lesson, so just our usual 3--books of the Bible, God made the universe, & 10 commandments.  Later I will read aloud from Christmas books & at bedtime from the Bible. 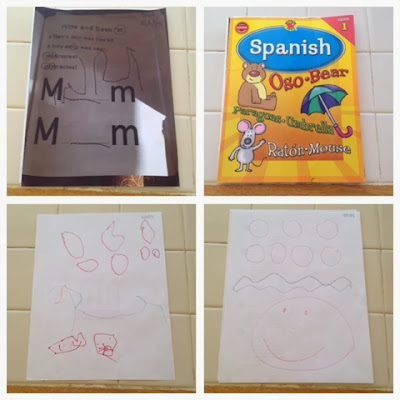 On Thursday we finished off the 4 day week with our fingerplay.  We read in the Bible about angels watching over Elisha.  We did our devotionals--I'm still using both--I really like ABC Bible Verses, but my son really enjoys the illustrations in Big Thoughts For Little People, so I include it also.  He wrote "M" & "m".  We read some scriptures in the Bible about angels & discussed the fact that we are not to worship angels, but only God.  He read a Bob book, we did some Spanish, & we did our songs.  There was no song for today's lesson, so we just did our usual 3--books of the Bible, God made the universe, & 10 commandments.  Later I will read aloud, probably from Christmas books, & then from Luke in the Bible at bedtime.  And that's a wrap for this week! 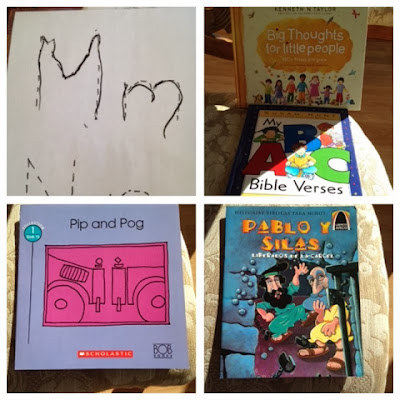