He is now old enough to do the height predictor calculator, so I did it--just for fun really.  The prediction is that he will be 6 feet tall at the age of 18, but it comments that most boys continue growing slightly more until the age of 21.

I have to say that the 23rd month was VERY interesting.  He is definitely in the midst of the so-called "terrible two's" now, I am dealing with LOTS of temper tantrums on a regular basis now.  But I am just blown away at how well he has learned to communicate his wants & needs at this point.  And I am even more blown away at how much he is comprehending.  I will give an example of this in just a moment.

He is totally obsessed with cars & trains ("choo choos") & trucks & planes these days.  He seems to have forgotten all those flashy noise-making toys, at least most of the time.  Occasionally he will pull one out & play with it, but not very often.  He does still like the alphabet bus one, but that's mostly because it has wheels & looks similar to a train.  He also really enjoys the "wheels on the bus" song that it plays.

He also really enjoys his books now.  He likes to look at them & say the words to what he recognizes in the book.  He can clearly recognize the word "clap", there is no question about it, he can look at just the word & no photos or anything else & will respond by clapping & will sometimes say the word "clap".

I haven't focused a whole lot on colors & numbers yet, but I think I need to start that soon.

As for that example I was going to give: for a while now he likes to turn his cars upside down & then I say "whaaaat?" "cars don't go like THAT!!"  It's just a silly little game that we play & he LOOOVES it so.  So the other day hubby, J, & I were out having lunch & I was telling hubby about the game & how much I enjoy it & how much J enjoys it too.  I can't believe how he laughs when we play this game.  J usually initiates the game himself & he originally started it too, but now sometimes I initiate it too.  So I'm telling hubby about it & suddenly J gets this huge grin on his face & he turns his snack cup upside down & starts LAUGHING, waiting for me to react.  It was clear that he knew exactly what I was saying to hubby, which totally shocked both of us!

This is what we got him for his birthday:
Lil J's birthday present

And here's a pic of his birthday cake I made for him: (sorry it's side-ways, don't know how to fix that on here....) 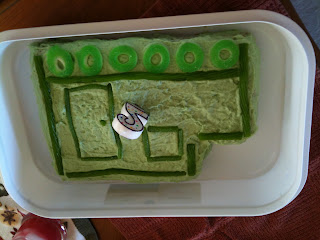 Yesterday I had to put him on a time-out.  After a time-out I always hold him in my arms & talk about WHY he had to go on a time-out, what he SHOULD have done that would've prevented it, & what he can do NEXT time to prevent it.  And of course I reassure him of how much I love him.  But yesterday was the first time ever he looked up at me & said "I sorry".  It was soooo touching.

I think that's all the updates I have for now......I am wondering how long I should keep up these monthly J update blogs......is anyone still interested in reading them?  Input would be appreciated.
Posted by Frau Guten Tag at 4/20/2011 08:39:00 AM 4 comments:

I haven't had much time for blogging lately, just too much going on.  But I have now had 3 blog comments that are pretending to be comments, but don't make sense in relation to my blog post & they have a link in them to buy pharmaceuticals online.  So I am now choosing to moderate all comments--I do wish google would give you an option to allow people you follow or who follow you to not be moderated, but I cannot find an option like that, so I have to moderate ALL comments at this point.  I am sorry for the delay in having your comment published on the blog.  But I oh so hate spam & will not tolerate it.  That's all for now.....
Posted by Frau Guten Tag at 4/12/2011 01:23:00 PM No comments: