Gluten is POISON......at least for some folks, myself included 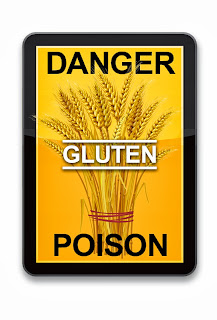 I learned at the end of last year that I have serious issues with gluten......and that my son does also.  As I do research & learn more & more I do believe that we both have celiac disease.  To be formally diagnosed we would have to eat gluten for some period of time (3 weeks I believe?) & have biopsies done on our intestines.  That is just not happening for my son.......and I'm not willing to endure 3 weeks of gluten consumption either at this point.

As I reflect back over my life, as early as I can recall, I can recall having GI issues.....and never really feeling 'well'.  I have spent my life (from teen years onward) in search of feeling better, feeling 'well'.   I had many tests done as a child & teenager & even adult (barium swallow, barium enema, sigmoidoscopy, the list goes on & on) & was never given any sort of conclusive answer.  I finally gave up asking doctors.  It's amazing as I listen to other people with celiac share their stories--most are so similar to my own.  I have tried so many different ways of eating over the years, all in search of feeling 'well'.  But wellness always eluded me.

Other health issues ensued over the years, and with what I know now, all caused by gluten.  Oddly enough, it was while searching for relief from interstitial cystitis that I learned gluten can be a contributing factor & sometimes is the causative agent in IC.  I honestly didn't think that would be my case, but I was searching for relief relentlessly & felt I must leave no stone unturned in my quest.  And so I decided to give it a shot & it ended up, at age 40, that I finally found the answer I was searching for all these years.

I used to laugh [silently to myself] when I would hear people rant about gluten.  And when I saw gluten free food in stores.  The fact that they would label obviously gluten free food with a big "gluten free" label I thought was stupid.  Little did I know about cross contamination issues.  I know so much about gluten now, it's shocking to me sometimes when I stop to think how much I've learned in such a short amount of time.  Anytime I feel frustration with someone for not understanding my situation I stop & think of what I knew about gluten prior to all of this.....I had NO CLUE about cross contamination.

Sadly my poor son has the same issue.......but on the bright side we found out early, at a very young age for him, so he doesn't have to suffer & be sick for years to come like I did.

Eating out is still a nightmare for us.  I can only hope that this will improve in the future.....or I'll just continue cooking everything at home, like I pretty much already do.  Eating at other people's houses is also tough.  I don't want to offend anyone, but I'm also so afraid that I will get sick, & most of the time I do.  When we go to a birthday party for someone I make sure I bring a gluten free cupcake for my son.  I can survive without cake, but I feel sorry for my son, watching everyone eat cake & he can't have any.   Most of the time I just don't eat at people's houses.  Even if the food is truly gluten free there is still the risk of cross contamination that most people know absolutely nothing about.

The one place I have good luck at is Chipotle.  I tell them it needs to be gluten free & they change their gloves & they have only one person handle my dish down the assembly line.  I have never had a cross contamination issue at Chipotle.  Sadly at most other places I have had mixed results & bad results (& this is coming from a person that honestly rarely eats out--I can't even imagine how much worse things would be if I did eat out on any sort of regular basis).  The biggest issue is that food workers are not aware of cross contamination issues.

My son was having issues also, & he eats out even less than I do (which is saying a lot).  I finally replaced our toaster (which had been here since before going gluten free & my hubby still occasionally has wheat toast) with a toaster oven & my son is doing MUCH better now.  It was clearly a case of cross contamination in our own kitchen.  My hubby was eating tortillas & toast on occasion, but he is now giving up tortillas.  I am not pressuring him to give it up, he clearly doesn't have gluten issues like me & our son.  When we travelled in the RV recently I asked my hubby if he wanted me to pack bread or tortillas for him & he said no.  He was gluten free for a whole week & didn't even mind!  I have to admit it was nice to have a completely gluten free environment like that!  There is some really yucky food out there being sold as gluten free food.  I really don't understand &  I hate it cuz most people think that's all there is when you're gluten free.  But I eat GOOD food & that's why, for the most part, my hubby doesn't even miss gluten.

Yesterday we took my mom to Benihana for her birthday.  It was my hubby's idea to go there.  I googled eating gf at Benihana & was not seeing good results.  I was fully prepared to not be able to eat.  I did take my own gf soy sauce with me.  Upon arriving our waitress said they did have a gf menu, but when I tried to order from it she didn't know what she was doing......at first I thought it was ME & I was asking her to help me understand & then the manager showed up & it was clear that she was wrong.  But in the end I got sick & so did my son (I shared my chicken with him, it was the only thing he ate there).  We watched the cook prepare the raw chicken & put only gf soy sauce on it, BUT the grill was not REALLY clean upon arriving, just wiped down, with food stains on it.....and I don't know what goes in the kitchen, ie how careful they are where they place food & how well dishes & utensils are washed, etc.  Cross contamination is tricky & most people are clueless about it.  The manager kept insisting that gluten was only in the sauces--soy sauce, mustard sauce, ginger sauce, teriyaki sauce, salad dressing, etc.  It seemed that he wasn't really aware of cross contamination, only of not putting a gluten sauce into food making it gluten free.

I suppose I need to improve in the area of what questions I ask......I need to ask more about what they do to prevent cross contamination, etc.  That is really the best way I can think of to ensure that I don't get sick, & more importantly that my son doesn't get sick, every time we do eat out.

One day we were out running errands & my hubby was getting hungry.  I told him to get whatever he wanted, not to worry about me, that I had a glutino food bar with me that I could eat.  He stopped at a place that he said has good turkey burgers & he inquired about gluten free options & found that they had a dedicated kitchen space for gluten free food preparation!!  They made me a chicken breast lettuce wrap sandwich.  They held the mayo cuz they weren't sure if it was gf, but I think it would've been messy with mayo (we were eating in the car on the go).  But I have to say it was REALLY good.  I had never before tried a lettuce wrap sandwich/burger option.  I had always thought I wouldn't like it.  But I actually loved it, just like I love the lettuce wraps at PF Changs.

Charcoal & glutamine are my course of action when I do get 'glutened', but it's still basically a waiting game until it's all out my system & my body recovers.  It can sometimes take up to 3 weeks for that, I'm sure hoping this time isn't that long.
Posted by Frau Guten Tag at 9/23/2013 06:43:00 PM