So last week we went on vacation & I chose to take the week off school-wise.  I did consider the fact that I could do school on the road in our motorhome, but to me a vacation means relaxing & taking a break & not following your usual routine.  Because of this I chose to take a break from school for the week.  I did take some school stuff with us in case Lil J asked for it, but he never did ask.

{For anyone new to this blog, I am using Heart of Dakota's Little Hands to Heaven, Teach Your Child to Read in 100 Easy Lessons, various forms of Spanish, & reading out loud of a chapter book for my 4 year old son}

So I decided to start having him memorize both the verse they give for memorization at church & the verse in his devotional each week for school.  This week the devotional reading falls on Thursday, but I am already teaching him the verse ahead of time.
So this week his church verse is: "God said 'I am with you and will watch over you wherever you go'"~Genesis 28:15
And his school verse is: "Even a child is known by his deeds"~Proverbs 20:11

So I was a little nervous trying to get back into school on Monday after our week-long break.  But we got going & all went well, except for struggling a little with him focusing in the reading lesson.  We started off with a new fingerplay.  This week will focus on the letter E & the number 6 & will continue with Joseph.  We read more about Joseph in the Bible, we did some dramatic play about what we read in the Bible.  I had him practice writing the letter E.  We glued 6 pillows onto the #6 page (because of Pharaoh's dream, dreaming while he was sleeping on his pillow).  Then my son asked to write the number six.  So I pulled out the number sheet & he ended up writing ALL the numbers.  Then we did reading lesson #76, Spanish, & ended with 3 songs--one about Joseph (7 fat cows), then our usual books of the Bible & God made the universe.  Aside from a little struggle with concentrating on reading it was a great day, especially after taking a whole week off!! 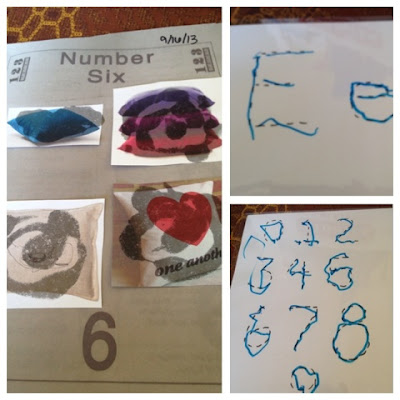 On Tuesday we continued with our fingerplay & read more about Joseph in the Bible.  There was something labeled as "Math Activity", but I didn't see it relating to math at all.  We were supposed to play 'Joseph may I' & imitate different types of animals.  The idea of it was that the king put Joseph in charge of the whole land.  I didn't see how this had anything to do with math or with the idea of the king putting Joseph in charge of the whole land.  I was very close to skipping it, but we still did it & then just discussed the idea of it, since the activity didn't convey it at all in my opinion.  We did 'hide & seek E', which my son is really good at.  And we did 'count on me', drawing rings in the boxes (because the king gave Joseph a ring to show that Joseph was important) & then counting them & adding them up.  He did really well at this also.  Then we did reading lesson #76 & he nailed it, so on Wednesday we'll be moving on to lesson #77.  Then we did our Spanish & music--7 fat cows, books of the Bible, & God made the universe.  We had a really great day!

I've decided to focus more on reading out loud to my son, at least on a more regular basis than I have been.  So as of this day I am going to try to do it daily, as part of his preschool.  Although I think I'll do it later on, after school time.  I think he'll be able to focus better that way.  Right now we're reading "James & the Giant Peach", a favorite of mine when I was a kid. 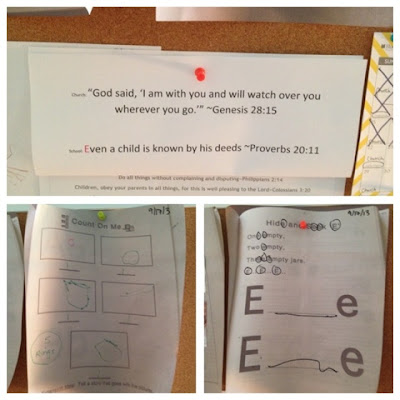 On Wednesday we continued with our fingerplay & read more about Joseph in the Bible.  I have to say that I really love that when we're done with our Bible reading & I ask the questions in his Bible, my son almost always knows all the answers.  He really is listening & comprehending.  And he'll often repeat what we read about later that day & sometimes even weeks later.  That really makes my heart joyous.  We did a little craft which was supposed to demonstrate that Joseph's brothers didn't recognize Joseph at first when they went to ask for food.  And today was making tape E day, which is always a big hit with my son.  He's been really into his trains recently & so he had a train drive over the E today, rather than a car.  We did a little acting out of what we read in the Bible--I was really starving, so I sort of abbreviated this one, but I did focus on the main point of it, which was the fact that Joseph forgave his brothers for what they did to him.  We did an extra craft (TP roll cow) & then we did reading lesson # 77, Spanish, & our songs.  When I put the songs on I have to admit that instead of singing along like I usually do I ran to the kitchen & started getting food for myself.  My blood sugar was really crashing.  I also started letting my son learn how to use scissors.  He's always watching me & wanting to try.  So I got him a pair of scissors & have started teaching him how to use them.

I've been trying to do 2 extra crafts each week.  It's often hard to find more than that & it also feels too busy if I do more than that.  But when I do less than 2 per week the week feels too light to me.  So it seems that 2 extra crafts per week is a perfect fit for us.  But I have to admit that I had a really hard time finding crafts for this week.  Most of the Joseph crafts correlate with his coat, which we covered last week.  This Sunday is the first day of Autumn & I was planning to add on a craft for that, so we'll be doing that one on Friday this week.  But I still wanted one more.  Since we're singing about 7 fat cows each day this week I decided to look for a cow craft.  I chose a toilet paper roll cow craft.  In the past I did a baby Isaac TP roll craft & an angel TP roll craft & my son really loved them & still has them in fact!  So I'm hoping he likes this one just as much.

On Tuesday of this week I sat down & looked at the next 3 weeks of school--all on Moses.  And I planned out what days we would do each of the crafts.  It works out perfectly with 2 per week.  Well I was actually short by one, but I was able to come up with one all on my own.  I'm quite pleased that I was able to do that, especially when creativity is usually so hard for me.  Hopefully it will turn out well & my son will like it, that's really what matters most.   I haven't yet looked at what crafts we'll do beyond Moses, I am hoping I can keep up the 2 crafts per week deal. 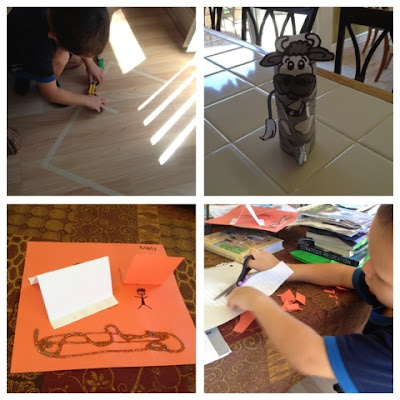 On Thursday morning Lil J woke up sick with GI issues.  I had thought we were going to be skipping school for the day, but after a couple of very rough hours he said he was all better & he was asking for food & drink & his mood & attitude were great once again.  He had gotten whatever it was out of his system I guess.  I am suspicious that our popcorn might not be gluten free.....so I emailed the company & am waiting for a response.  We had just eaten popcorn the day before & I am having some slight issues myself also.  (I have to say I am honestly grateful that I also have gluten issues, I don't think I'd ever be able to understand my son if I wasn't experiencing the same thing first-hand myself; it's definitely an 'illness'-if that's the proper word-that you FEEL more than you OBSERVE)  Anyways, I then suggested school & he was all for it.  So we continued today with our fingerplay, read more about Joseph in the Bible, did our devotionals today--I still chose to do both of them.  He actually READ his memory verse out of the ABC devotional book--he was REALLY proud of himself & I am very proud of him too.  We did a "bean E", we glued beans onto a paper in the shape of an E.  He didn't like this activity at first, but then decided he did like it after I got started & he took over & finished the project.  We did some discussing about what we read in the Bible today, we did reading lesson #77, Spanish, & our songs--7 fat cows, books of the Bible, & God made the universe.  He wanted to drum to the music today--I do think he's going to end up being a drummer.  He has a keyboard, guitar, & drum & he really loves his drum.  And on vacation last week he wanted an Indian drum in a gift shop in Red Canyon (near Bryce Canyon).  We did buy it for him, simply because he loves drumming so much.  And when I was a kid I had bought one of those drums also.  As we wrapped up school I reminded him that later on we would read out of James & The Giant Peach.  He was all for it, but for now ran outside to play.  So grateful that he's feeling well so quickly! Thank you Jesus!! 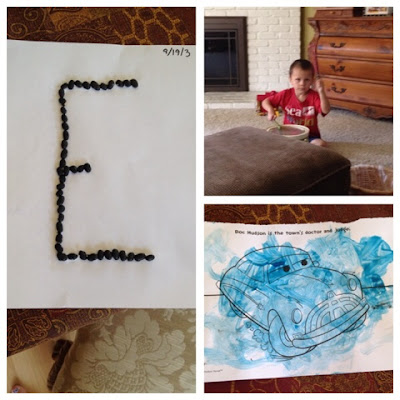 He also wanted to do some painting today--here is a picture he painted of Doc, from Disney Cars


On Friday we continued with our fingerplay, we read more about Joseph in the Bible, did some discussing & acting out of what we read in the Bible, practiced writing "E" & "e" again.  We did an extra craft today, for the first day of Fall.  Then we did reading lesson # 77, Spanish, & our songs.  Aside from some behavioral/attitude struggles during reading it was a great day. 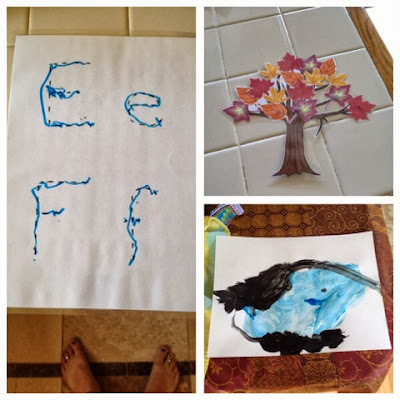 He wanted to paint a blue Chevelle today, I like that I see 4 tires & the black on the upper left he says is the engine