I am using Heart of Dakota's Little Hands to Heaven, Teach Your Child to Read in 100 Easy Lessons,, various forms of  Spanish, & reading out loud of a chapter book.

This unit focuses on the letter F, the number 7, & Moses.

On Monday we began a new fingerplay, we read about God's people in Israel crying out to God & God hearing them & that He is going to send them a helper--setting the stage for Moses.  For a math activity we used blocks to build towers--first we built a tall skinny tower & next we built a shorter & wider tower.  And Lil J counted the blocks (perfectly I might add) after each tower was built.  He practiced writing "F" & "f" on the tracer sheet I made.  We did 'count on me', drawing & counting bricks.  He did really well with this one.  Then we did Spanish.  Now most days I just read to Lil J in Spanish.  I have lots of Bible stories in Spanish, that's mostly what I do.  And I just rotate them around & around, pulling the one furthest left & when I'm done I place it on the right.  The one I pulled today just happened to be about Moses--I just thought that was very cool since it lined up perfectly with our school work being about Moses this week (& the next 2 weeks after this week).  Then we did reading, lesson #77, & then our songs--there was no specific song to go with today's lesson, so we just did The Books of the Bible & God Made the Universe.  He asked me to read out loud to him, but I told him I'd do it later.  He is starting to REALLY like the reading out loud--I hope it stays like this when we finish this book & move on to a new one.  He REALLY seems to like this book.  He was asking me to read to him from it yesterday also, but I wasn't at home & didn't have the book with me so I wasn't able to do so.

Yesterday at church we got his new memory verse for this week.  And last night I looked up the "F" verse for school this week & we started going over them.  The church one is very doable & I'm sure he'll have it down by the end of today, but the school verse is rather long.  I'm not so sure he'll be able to fully memorize it.  But I'm sure he'll try.  He is such a perfectionist.

And the school verse is: "For God so loved the world that He gave His only begotten Son, that whoever believes in Him should not perish but have everlasting life." ~John 3:16 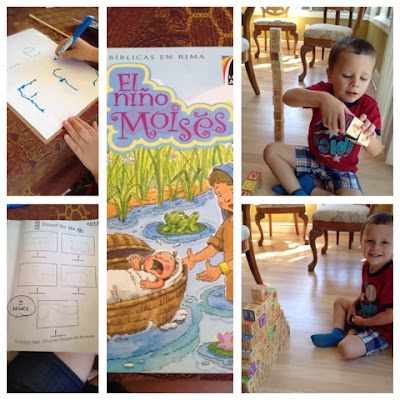 On Tuesday we continued with our fingerplay, read about baby Moses in the Bible, & did a baby Moses craft that was part of our school curriculum.  It was masking tape F day, which my son loves.  He picked out several cars that he wanted to drive on the F.  We acted out what we read in the Bible & did some discussing.  He nailed reading lesson #77, will be moving on to lesson #78 on Wednesday.  We did Spanish & listened to our songs--a baby Moses song, the books of the Bible, & God made the universe.  James & the Giant Peach will be our out loud reading a little later in the day. 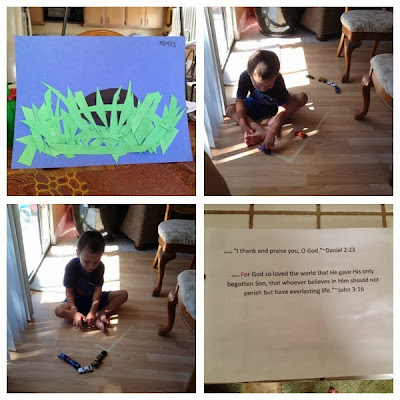 On Wednesday we continued with our fingerplay, we read about Moses in the Bible, we acted out & discussed what we read about in the Bible, we made a play-dough "F", we did an extra baby Moses craft.  (I was supposed to do this on a piece of blue construction paper, but I suddenly realized that I'm all out of blue, so I sort of drew water on white paper instead & then helped Lil J glue the rest of it on!!  LOL!!!  My hubby thought it looked much better like this than it would have on blue paper!)  We did reading lesson #78, Spanish, our songs, & then I had my son watch "Prince of Egypt".  Later we will read some of James & The Giant Peach.

On a sidenote: as of this day I have the Books of the Bible song memorized completely.  (some time ago I had all but the minor prophets memorized)  It took a little longer than I had expected BUT I have to admit I was only singing it at school time, once each day, not even thinking about it, or trying to memorize it at any other time, I've just been too busy.  But I'm still pleased that I've memorized it & Lil J knows most, if not all, of the song as well.  And he definitely knows all of God made the universe by heart as well.  The music portion of this curriculum is a 4 CD set.  Very soon we will be moving to the 2nd CD.  I think at that point I will just put the first CD away & sing the books of the Bible & God made the universe on my own, without the CD, rather than dealing with 2 CDs for music time. 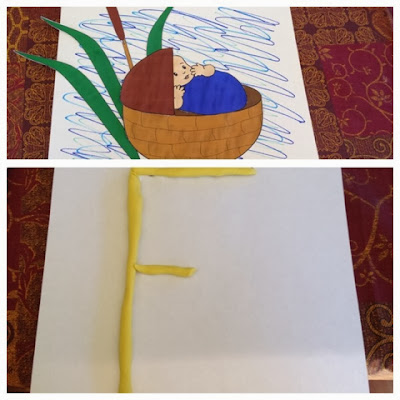 On Thursday we continued with our fingerplay, we read about Moses in the Bible (the burning bush), & we did our devotionals (both of them still).  My son did not completely memorize his school verse this week, it was very long & I really didn't push him because he's such a perfectionist & I didn't want to see him crying over it.  He's done just fine with his church verse & I'm hoping the school verses are shorter after this one!!  We also did "hide & seek F", which my son is really good at.  And then he glued 7 shoes onto his #7 page.  (shoes because Moses took off his shoes at the burning bush).  We did an extra craft about the burning bush.  I traced his hand on paper & that was the bush.  I had him color in the bush & then I cut up red, yellow, & orange "flames" & he glued them on the bush.  We did reading lesson #78, this is where my son's perfectionism kills me.  He has almost no attention span at all & he has a really hard time focusing on reading because of it.  But he knows the words, he is super smart.  Sometimes I think he's just not ready yet, but yet he REALLY wants to read.  And if we don't do reading he feels like he's being punished, no matter how I try to explain it to him.  He will beg & beg & cry if we don't do reading.  So I just have to be SUPER patient with him, but also remind him constantly to focus & look at the words.  It's tough.  I sure hope it gets easier with time.  I am praying for God's guidance & wisdom in regards to this.  Then we did Spanish & then we listened to our songs--a song about Pharaoh, the Books of the Bible, & God made the universe.  He was begging to paint since before school started & I kept telling him he needed to wait until after school.  So there will be painting & also reading of James & the Giant Peach later on this day.

On Thursday I finally got the rest of what I needed to finish the project I am making for Lil J's bedroom.  Not sure how long it will take me to complete it, but I'll be posting it here in my blog when I finish.  I am very excited!!  Every step of this project is dealing with things I have never had any experience with before.  I would've never even tried normally, but I REALLY like it & want to make it for my son.  Part of me is nervous that I'm going to screw it up, but part of me is excited because I'm learning new things.  I had no craft experience or knowledge AT ALL prior to starting homeschool preschool with my son & now we are only 7 weeks in & I know so many things that I never knew before.  This is an amazing experience & I have learned that I LOVE crafts!!  I want to learn so much more. 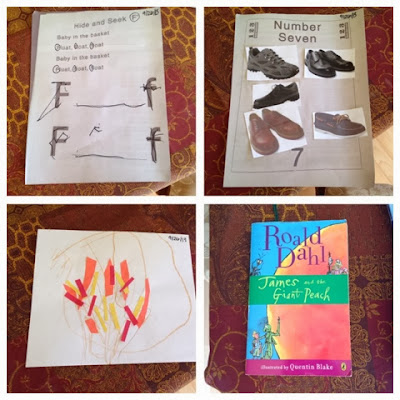 On Friday we continued with our fingerplay, we read more about Moses in the Bible, practiced writing "F" & "f" again.  We discussed the plagues & consequences to our actions--both good & bad consequences.  I was surprised with reading today (lesson #78)--it started out badly, but very quickly I got his attitude turned around & we were having a blast.  I was sooo pleased.  Then we got to the end of the lesson, where he is supposed to read sentences, a few short paragraphs.  He broke down in tears.  I offered to put it away & instead of getting even more upset like he usually does he said he would like to read them later, not right now.  I commended him for being so mature about the situation & told him absolutely we could do that.  We proceeded with Spanish & then an activity in the kitchen sink (I did this one out of order, only because my son loses his focus if we move around from room to room & getting out of our chairs, etc while doing school)  In the end we turned the soapy water red (like the Nile River being turned to blood) & discussed the plagues & consequences in general once again.  Then we finished off with our songs--pharaoh, books of Bible, & God made the universe.  Later on we will finish off James & the Giant Peach--we only have 2 more chapters to go.  By Monday I will have a new chapter book picked out to read each day.

Right after school was finished Lil J asked to watch TV.  I told him there would be no TV until school was finished & he still had his sentences to read, so it wasn't finished yet.  He told him me wanted to read them, just not now, & I want to make sure I hold him accountable to his word.  As of now we haven't done the sentences, but I have no doubt they will get done & I am hoping & praying they can be done with a good attitude.  Perhaps I should split the reading lesson in two parts during our school time.  I could do words in the beginning of school time & do sentences later, nearer the end of school time.  Perhaps that would help him.  I think I'm going to try that on Monday & see how it goes. 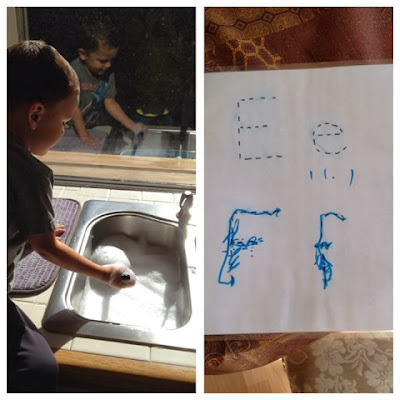