We've been trying to take a trip each month since we bought our motorhome last August, but so far we always end up doing it every other month instead.  We had a trip planned for the last weekend of December (AFTER all the craziness of Christmas, we couldn't possibly have fit one in BEFORE Christmas) but then we needed to cancel to be able to do Christmas with my family that weekend.

My hubby took a week off for January--but he had a lot of things he wanted to do around the house.  So Monday thru Wednesday he did stuff he wanted around the house.  It was a normal week for me, house cleaning, laundry, homeschooling our son, & then on Thursday after homeschool was over we went to the zoo (Lil J & I go to the zoo at least once a month & he's been wanting to show daddy the zoo, he was sooo excited--except it started to rain & the train had to be shut down--he was soooo upset about not going on the train with daddy.  But they actually came looking for us, found us in the gift shop, & gave us free passes to ride the train next time we are there).  On Friday hubby joined me & Lil J for J's swimming lesson.  And later on Friday we took off for a weekend trip in our motorhome.

I am proud to say that I packed the motorhome super fast this time around.  The first trip it took me a really long time to pack--trying to figure out what we would & wouldn't need.  And I had NEVER packed food before!!  The second trip was a weekend trip, rather than a whole week, like the first one, so it took me less time to pack, but it was still a pretty lengthy process.  But this time around it was super fast.  I was really pleased & proud of myself.

We left on Friday & came home on Sunday.  We went to Calico Ghost town in Yermo, CA.  I had been there when I was young, with my family.  I remember liking it, but really couldn't remember much.  There were certain things I saw that I did actually remember, I was very surprised.  There was a building (house?) made out of glass bottles--I somehow didn't take a pic of it, but I remember it REALLY well for some reason.  And there was a mining tunnel that once we got inside I remembered really well.

For some reason we had a lot of "issues" on this trip, which is something we haven't experienced yet before, but God still watched over us & we still had a lot of fun.

We are not allowed to keep our motorhome where we live, our HOA doesn't allow it, so we have it in a storage facility.  Upon picking it up we realized we had had a mouse visiting while it was in storage.  Thankfully we had just had it home for Christmas time & there was no evidence of that then, so we know it hadn't been there very long & it didn't appear to do any damage, aside from building a nest with our toilet paper!  We set a trap & never caught anything, so I think it had already moved on prior to us picking up the motorhome from storage.  Unfortunately this meant we had to wash all our dishes....just to be safe.  From what I hear it's a common problem when keeping RVs in storage facilities, we will have to do more to deter them in the future.  A friend of our's used to store her trailer in the same storage facility & she told me they had never had an issue there, so we had mistakenly thought it wasn't going to be an issue.  She had said it's more of an issue when you store it parked on dirt rather than pavement.

When we took our first trip, back in September, we hadn't realized how long it would take for the fridge to cool to the proper temperature & we didn't allow enough time for it to be completely cooled before taking off.  I really should've asked my mother, I don't know why I didn't think to do so ahead of time, since she had packed up our motorhome countless times when I was a kid.
In November my hubby planned the trip very last minute (& then didn't actually turn the fridge on when he thought he was doing so) that we again didn't get it properly cooled prior to leaving.  I had put my foot down & requested no more last minute stuff or stuff where we don't get the fridge cooled completely before packing our food & leaving.  I had asked hubby to bring it home on Tuesday or Wednesday this time, but he didn't until Thursday.  On Thursday night he was trying to turn on the fridge & it absolutely wouldn't turn on.  The next morning he called a service center about it but they said they didn't have time to look at it.  We had planned to just take our food in the ice chest & then we would plug into electric hook up at the camp site & it would cool there.  But then my hubby goes back out on Friday & tries it again & voila, it turned on!!  Of course it wasn't enough time for it to be fully cooled by the time we departed, yet again.

We were surprised to see water damage in the wall of the kitchen--that wasn't there before.  And when hubby closed a cabinet (with a mirror in the door) the mirror cracked.  And a piece of trim behind a seat came off, out of nowhere, for no reason.

And then when hubby hooked up the water at the camp site it caused water leaks in the kitchen faucet & behind the toilet!!  It really felt like everything was going wrong at this point, but we handled each issue as it came.  We ended up unhooking from the water there & using what we had in our freshwater tank.  That seemed to slow down the leaks.  Hubby was chatting with our camp neighbor (from Oregon) & he said we needed a water pressure regulator valve when we hook up to protect our motorhome.  We ended up realizing we had one, we just didn't know what it was.  We have sooooo much to learn!!!  (& we still need to buy a surge protector also!)  On our first trip, back in September, we noticed that the heater was kinda noisy, but it worked well aside from the noise.  It was the same on our trip in November.  But on Saturday night it quit working completely.  It had been getting noisier & noisier & we had said when we get home we need to have it looked at it......and then it wouldn't work anymore, at least not without making tons of noise like it was going to blow up.  Not to mention no one was going to get any sleep with all that noise going on.  We shut it down & our neighbor from Oregon came to our rescue & loaned us an electric heater to use for the night.  It was VERY cold in Yermo, even in the daytime, I don't think we would've made it there during the night without heat.  We will definitely make sure we have an electric heater stored away in case of future emergency (granting that we have electric hookups!).

But despite all the challenges we had a really nice time. 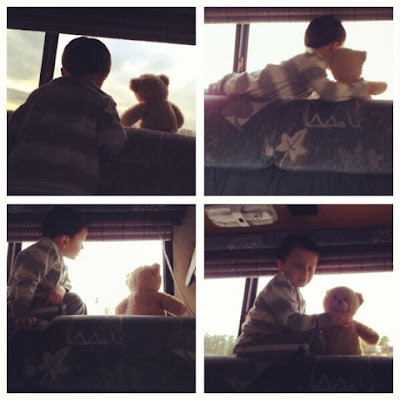 Lil J having fun with his "Buddy" on the drive there 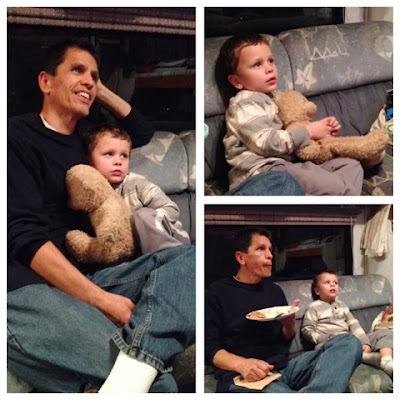 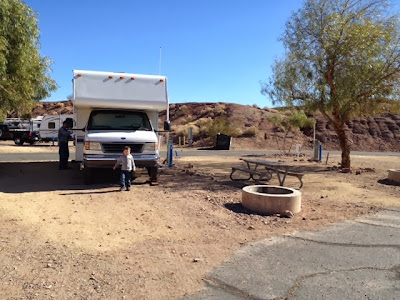 Our camp site--we were excited when we saw the firepit, but sadly it was too cold to be outside with a fire 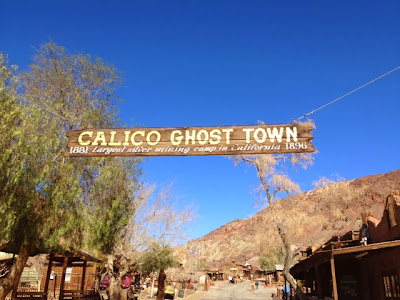 We spent Saturday in the ghost town--I guess the entrance fee was included in our camping fee, which was nice & we could enter & exit & re-enter as often as we liked. 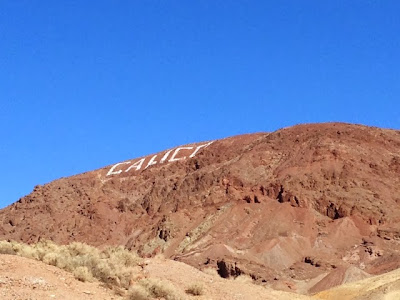 Up on the mountain 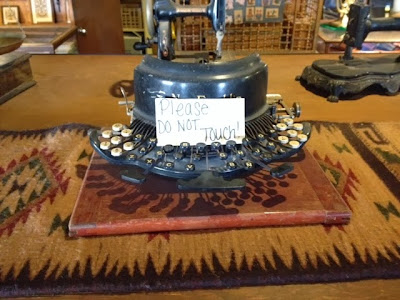 There was lots of old stuff.  Fascinating stuff.  I have seen VERY old typewriters before, but none that looked like THIS!! 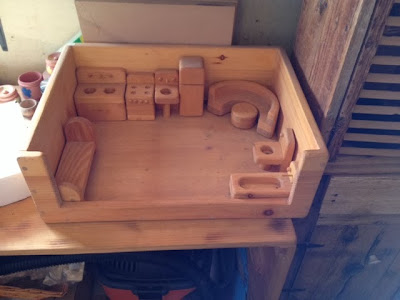 This has got to be the cutest doll house I have ever seen--totally carved out of wood--if I had a daughter I would be buying it for her for sure!! 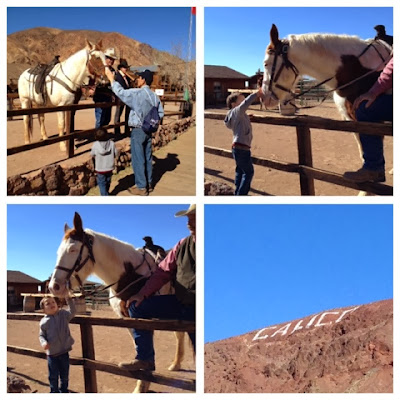 The guy with these horses called us over to show us the horses & tell us about the horse back ride they offer--but Lil J wasn't old enough to go on the ride.  Lil J was really nervous about being so close to the horse at first, but given enough time he came around & started petting it on his own--he's so much like me in that regard.  'don't push me, just let me get comfortable at my own pace' 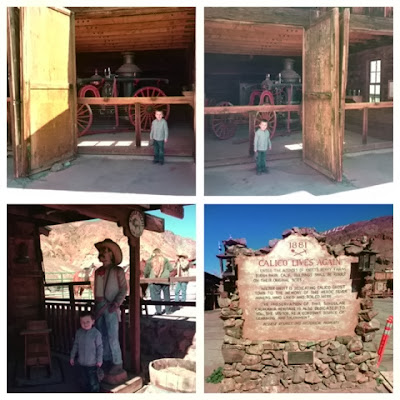 A really old fire truck & some other cool stuff 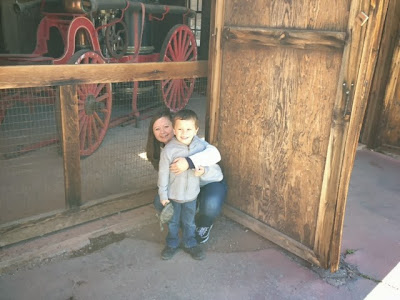 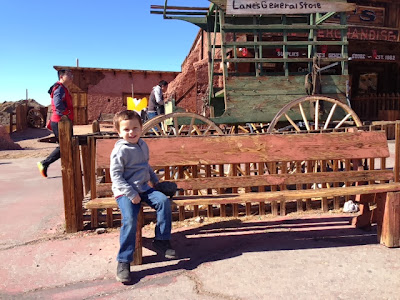 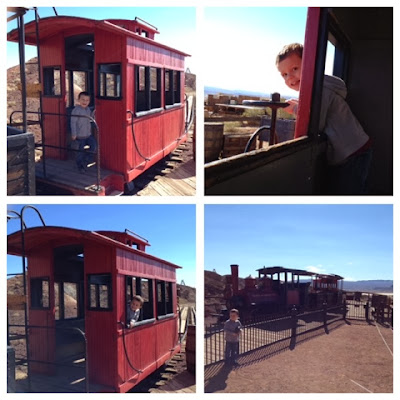 Of COURSE we had to ride on the mining train.  When we got to it they were out to lunch.  While waiting we went on a mine tour (1000 foot tunnel I believe it was), which was really cool.  It was a package deal that included the mining tunnel, panning for gold, & the mystery shack.  We did the mining tunnel & then the train & then panning for gold & then the mystery shack.  Somehow I didn't get pics of any of those things though, aside from the train.  (I got really sick in the mystery shack though & had to exit early there & I don't think I took ANY pics after that)  While the 1000 foot tunnel was really cool (& I remembered it well from my childhood--major flashbacks!!) the panning for gold wasn't worth paying for in my opinion, especially in the freezing cold water.  And the mystery shack would've been cool, if I hadn't gotten sick.  Be warned!  I do not remember this mystery shack from my childhood for some reason. 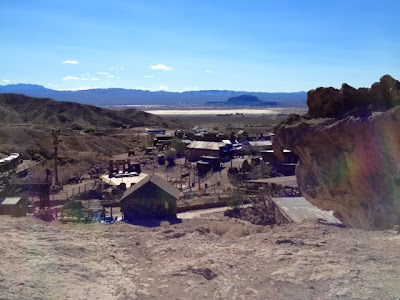 a very nice view from the train station 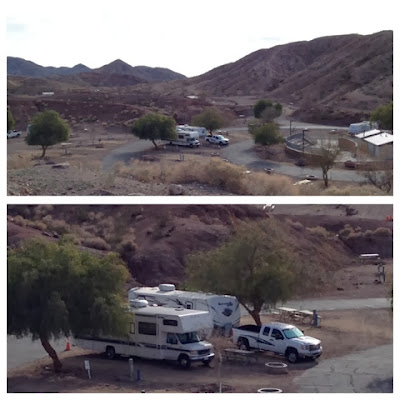 Sunday morning we hiked up a hill & this was our view of our campsite.  The bottom pic is zoomed in. 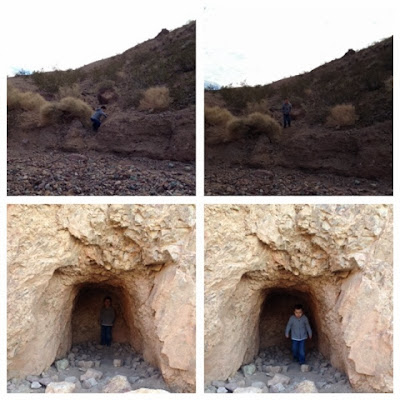 In the top 2 pics: Lil J was REALLY proud of himself for climbing this hill all by himself!  On our hike we found several small caves (probably leftovers from mining tunnels), the bottom pics here were Lil J exploring one of those caves. 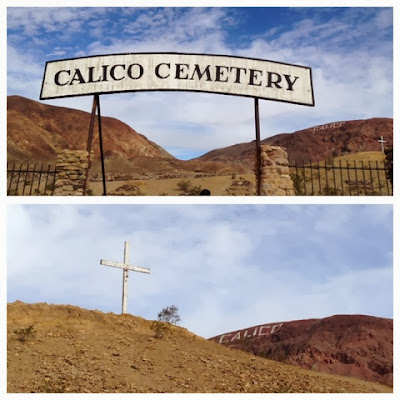 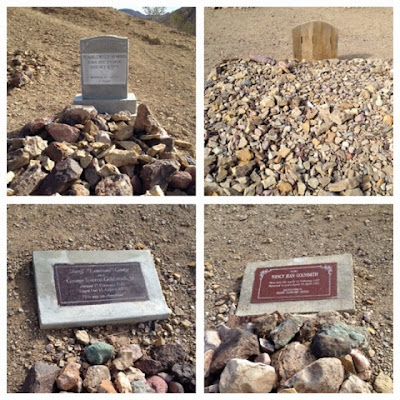 My hubby didn't care much for the cemetery & didn't understand why I wanted to see it.  To me it's just as much history as the rest of the ghost town is.  There was a lot of interesting head stones, etc in here.  And I was surprised to see some deaths as recent as 2005 & 2008 in here.  And there was a 2 year old that lived 1895-1897 & it had fresh flowers on the grave.  I really wondered who was still visiting that grave. 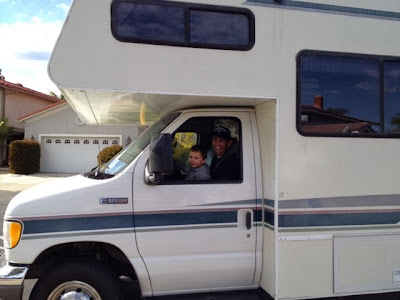 Back home at last, learning how to drive the motorhome!

Can't wait to see where we go on our next adventure!!  Although we have some repairs that need to get done first, so it might take us a little while before we get to go again.