Stepping outside our comfort zone 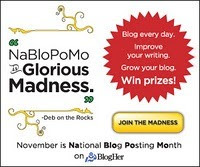 When I first became serious about transitioning to vegan eating from vegetarian eating I went looking for a cookbook.  I happen to love cookbooks & felt I could use some good & new ideas.  Most often I don't follow recipes in cookbooks exactly as they are written.  I often use them for a method, idea, & end up changing a lot of things & making it my own.  Occasionally I do follow them exactly as written though, especially when baking or if it's something I've never tried before.

I can remember the day, I was at Mother's Market looking at the book rack.  I had picked out all the groceries needed & stopped at the book rack.  Lil J was being fussy & so I was trying to rush.  A lot of the books went on & on about WHY you should go vegan.  I didn't want or need that, I just wanted RECIPES.  In my rush I found one.  It's called "Viva Vegan" by Terry Hope Romero.  And as I flip through the pages I just see tons & tons of recipes.  Exactly what I'm looking for!!

When I got home & got all the groceries put away (I had also stopped at Costco that day, so I had A LOT to put away) I pulled out the cookbook.  It was only then that I realized it was a cookbook entirely devoted to latin foods.  How awesome is that???  Vegan latin food??  YUM!!  As I read the introduction I was thrilled to see that these recipes were about cooking REAL food, mostly from scratch, not requiring expensive processed foods.  Totally my style!!

At some point I discovered that Terry Hope Romero had co-authored several other cookbooks with another gal.  Gradually over time I have acquired those books as well.  Their desert ones are ridiculously fabulous!!  I mean, honestly, there are a lot of cookbooks out there, but a lot of times, especially with healthy cuisines & ESPECIALLY with vegan foods, they just plain taste nasty.  I have always been loyal to cookbook authors & I am definitely loyal to these gals.  I know they won't steer me wrong.

Of course in this day & age you can find these authors on Facebook & so I friended them & liked their pages.  A while back Terry Hope Romero was asking for volunteers to be recipe testers for an upcoming cookbook.  I volunteered but didn't hear anything & after a while I assumed she had enough.  Then sometime last month I received an email with all the details.  She says she is taking on way more testers than she ever has before, so I don't feel too flattered, LOL, but I am still thrilled at the opportunity.

So far I've tested 10 recipes.  I'm not sure what the title of the cookbook will be as of yet, or what exactly the theme is.  The recipes are of a wide variety of ethnicities.  I am allowed to discuss the project & can say what I'm making, etc, but I am not allowed to divulge the actual recipe.

My family has been quite supportive, eating & enjoying most of the recipes.  It's usually my entree & their side dish.  A lot of the Asian recipes call for ingredients that I don't know where to find & I'm not familiar with.  So most of those are out.  But I am doing the Columbian ones & the middle eastern ones.  But this project has definitely taught me to step out of the box.  I am being forced out of my comfort zone in the kitchen.  And, surprisingly, I like it.  I don't think I've disliked a single recipe so far.  I mean, I know she's a great chef (is that the correct title??), but it doesn't mean that our tastes & food likes & dislikes are always gonna be the same.

But I'm now finding myself feeling more adventurous in the kitchen.  I've acquired a few new spices in the process.  I am thumbing through the cookbooks I already have by her.  But I also feel like right now I need to focus on the test recipes.  Once I'm done with this project then I will definitely make more from the cookbooks I have.

Honestly I was a tad hesitant about taking on this project, but in the end, I am really really glad that I have.  I really feel like I needed to learn to be more adventurous in the kitchen.  I mean, don't get me wrong, I'm a good cook.  And I do make a wide variety of foods, but still there is a certain comfort zone within your kitchen, though it may be a large & wide one, that you just don't step out of.  I feel like I'm on a grand adventure & I don't want it to end.  :)
Posted by Frau Guten Tag at 11/10/2011 11:29:00 AM

WOw. That's great that you are able to do that; test recipes. I have been thinking about getting a vegetarian or vegan cookbook and trying different things. I will have to look for one or two of her books. I really prefer recipes that use "real" "everyday" foods. Though I also have been adding to my spice collection.