Such a long awaited day!!


I have been anticipating & waiting for this day for YEARS now.  My first day of "officially" homeschooling.  It's only preschool, kindergarten will be even more exciting & of course the legally required first grade & onward will be EVEN MORE exciting.

As I've stated before, I am using Heart of Dakota's Little Hands to Heaven for preschool.  And we are still doing "Teach Your Child to Read in 100 Easy Lessons" & some Spanish lessons also.

This wasn't really very different from what we've been doing, so my son has no idea what the big deal is to me I suppose.  I've been doing a daily Bible study with him since he was a baby & we started reading lessons when he turned 3.  And more recently we started some Spanish lessons along with the Bible & reading.

He really enjoys learning, we do it Monday through Friday & often on Saturdays he's asking to do school!!  I used to refer to it as "Bible study".  My son knew what that meant.  Then when we started reading lessons I started saying "Bible study & reading".  As Spanish got added on & preschool was fast approaching I shifted the name of it to "school".  My son was a little resistant at first to that change, but came around eventually.

A couple of weeks ago I headed to Michael's with a list of supplies I would need for the preschool curriculum.  When I got home I organized them all in a big box I had still from Costco.  I liked this idea because then when we do school I can just pull out the box & have everything I need & put it all away together quickly & easily.  I haven't really found a home for the box yet, so it's been sitting in the garage.  My son kept going into the garage looking at the box excitedly.  He finally asked me what it was for.  I told him it was for school, for preschool.  A new school that we would be starting soon.  Then he started asking to do school, but he would quickly add "THAT school" (pointing to the box of supplies)  I hadn't planned this but it worked out great.  My son usually resists anything new, any change to established routines.  I was concerned that he would be upset about changing up our "school" routine.  But the excitement about the supplies really helped to get him over that. He was so excited to use the new supplies that he was welcoming the change in routine.

So over the weekend I told him we would be starting preschool this week.  He was very excited this morning, rushing me as I did all my "Monday chores" (laundry, bathroom cleaning, dusting, sweeping, vaccumming, etc).  We finally got to it & it went very fast, even with the added reading lesson & Spanish lesson (I put our original Bible study on hold for now, since this preschool curriculum covers Bible).

It did seem too simple, too easy.  But I've seen A LOT of people online saying that they felt that way in the beginning, but that their children still learned key concepts that are super important.  So I will definitely continue.  The Bible story itself is super short & had only 2 discussion questions at the end.  The Bible study we've been doing since he was a baby is so much longer.  But perhaps the Bible study we've been doing is too far above his comprehension & he can better understand this?  I certainly hope so.  It is written for kids that don't know the alphabet, or so it seems.  I'm supposed to teach a letter (& the sound that the letter makes) each week.  So this week is A.  As I ask "what letter is this?" my son stared at me in disbelief, LOL.  He knows his alphabet extremely well (I taught him right after his 2nd birthday) & since he's already reading he knows the sounds each letter makes as well.  When I asked about the sound A makes he again looked at me in disbelief.  So I tried to focus more on the WRITING of the letter, since he has no experience with that.  I just had him trace his finger over the A & a.  Hopefully we can make some progress in that department.  There was some painting involved today & that is something that he is really interested in, but I have never allowed before.  I honestly just didn't have any paint for him to paint with up until my trip to Michael's very recently.  So after we finished school today I pulled out the watercolors that were on my supply list & let him just have fun with them.  He has never shown much interest in crayons, but he certainly does like painting.

Once we finish off the curriculum (next May or June or so) I plan to resume daily Bible study & some sort of reading (I'm sure he'll be done with the reading lessons by then) & Spanish & continue that through the summer along with some workbooks possibly.  A friend of mine gave me some very interesting workbooks & I also have a workbook on managing money God's way for little ones that I want to do with him, but I feel like it might be too much to do those during the school year.  My plan is to school year-round, but to keep the summer months lighter & more "fun" than the rest of the school year.

However, if I continue to feel that this curriculum is too simple or easy for him maybe I will add on something else.  I do like that this curriculum is so hands on & crafty & fun.  I've always dreaded that sort of thing in the past, but as long as it's explained simply enough (for my non-crafty & imaginative brain to comprehend) I do actually find it very fun.  We did a couple of crafts for hubby for father's day & I have to admit that I really had a blast doing that.  At this point I say "bring on the crafts!!"  I think it's good not only because it's so fun, but that I think it really helps kids to engage & comprehend better. 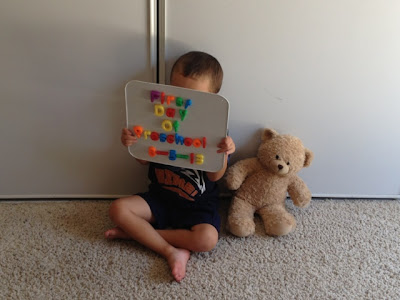 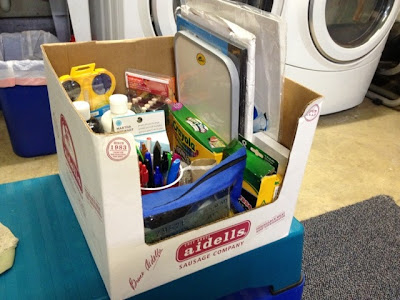 I too feel like Little Hands is quite simple and easy. My son knows his letters/sounds as well, although we haven't done any writing nor have we attempted reading or putting sounds together, so I don't think he's beyond it yet. I do think the simplicity is appealing, though. It's easy to weed out and "upgrade" parts that need a little more challenge to them.
Sounds like you have created a lifestyle of learning since day 1 - way to go!