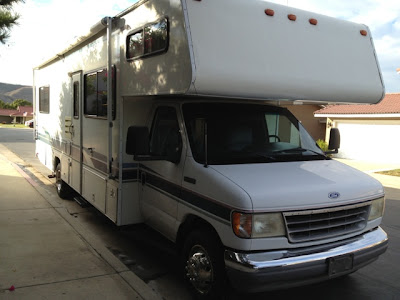 We are the new proud owners of this RV.

As a child I spent a lot of time in a motorhome.  My father loved travelling--so do I, it's in my blood I guess.  Those are my happiest & dearest memories, yet they are also somewhat vague.  I'm the youngest in my family & we did our RVing during my younger years......and then my parents separated & divorced.

I have always felt extremely blessed & grateful for my travelling experiences in my childhood.  I quickly realized that most other people don't get to see the things that I had seen.  It was not something to be taken for granted.  It instilled in me a great respect for nature & all that God has created.  And over the years I have dreamed of being able to do it again.

Now that I am a mother I have longed to be able to do it even more.  For my own child.  To give him wonderful memories & opportunities to see the world just as I had.

My husband has never RV'd in his past.  But he has always had a desire to own a trailer & do so.  He really likes the fact that you can unload your trailer somewhere & still drive your vehicle around.   Trailers are also much more affordable BUT I really pushed him to consider a motorhome instead.  With a young child it is much easier to travel in a motorhome than in a car or truck that is pulling a trailer.  You have the bathroom right there, food & drinks right there, they can move around, etc, etc.  I also think a  motorhome is a better choice for safety reasons.  Suppose a bear comes & starts attacking your RV.  Or a burglar or other malicious person.  In a trailer you have to hope that you can sneak out & make it to your vehicle.....even worse if the vehicle isn't hitched to the trailer.......but in a motorhome you can simply drive away.

Surprisingly buying this RV has stirred up a lot of unexpected emotions for me.  In my younger days I always tried to live my life in a way that would leave me with no regrets.  But as I get older I find that I have many regrets.  I suppose it's not possible to never have ANY regrets in life.  But some are harder to swallow than others.  I wish so much that my father was still here, that I could share this joyous moment with him, that we could go RVing together.  And my hubby & I have SO MUCH to learn about operating the RV.

Oddly, the couple we bought this RV from reminded me SO MUCH of my father & stepmother.  I think that's what got the emotion ball rolling for me.  And then I started thinking back & remembering childhood memories that, of course, include my father.  After my parents divorced I didn't see my father anymore.  I had wanted to, but there was just too much drama involved.  I remember I had many friends with parents that were divorced.  Some of them wished their parents would get back together.  I never dreamed of my parents getting back together, but I did envy my friends who were able to spend time with both parents with no drama.  I do believe that every child should be able to (& in fact NEEDS to) grow up loving & respecting BOTH parents & believing that their parents are the greatest people in the world.  Sadly my case is not isolated, I see many like this unfortunately.

In my adult years it felt awkward after not seeing my father for so long.  And I had no idea if he had any desire to see me.  On the few occasions that I did speak to him it felt like he was more interested in seeing my brother than me, which didn't feel very good I must admit. And then I went back to school & had no time for a social life.  My whole goal in life was to finish school as fast as possible (while still working full time), it was hard & it robbed me of a lot of years of my life.  I had never expected to marry before I finished school, but I did.  My husband had wanted to meet my father & I do think they would've gotten along great.  They have a lot in common.  But I was still trying to finish school & I had married into a blended family that was quite a challenge.  So I definitely had no free time at that point.  I had every intention of calling my dad once I finished school.  And sadly just 7 months before I finished he passed away unexpectedly.  Even worse, I wasn't notified until a couple of weeks AFTER his passing.  I didn't even get to say my goodbyes.  That is SO hard for me to swallow.  Like I said before, I have many regrets involving this situation. {For the record: I blame no one but myself. There are many reasons & factors that influenced the choices I made but ultimately "I" made those choices & I reaped what I sowed}

I also feel like I'm getting such a late start at RVing.  But as I was thinking I realized that my father was the same age as I am now when he bought his first RV.  As I titled this post, it's never too late to begin anything in life.  As my stepmother shared with me after my father had passed, don't put things off or wait.....both of her parents had wanted to travel & were putting it off until they retired & neither of them lived to see their retirement.  Those words have definitely stuck with me.

I know a lot of people complain about the gas mileage in RVs.  But I don't understand how people can pay for hotels & eating out.  The cost is outrageous in my opinion (not to mention I never feel comfortable in hotels).  We just recently spent a weekend in Santa Barbara for our 8th wedding anniversary.  And the amount we spent just to get there, stay there, & eat there in ONE WEEKEND is what we are estimating we will spend in ONE WEEK for gas in the RV for an upcoming trip we have planned & the trip involves quite a bit of driving, not just driving to a location & staying put.  (And for the record we didn't stay in a fancy hotel & we didn't eat at expensive restaurants in Santa Barbara)  In an RV you have your own food, which is a big savings compared to eating out.  And sometimes you pay for a camping site (you don't always, depending on where you are going) but it's nothing compared to the cost of a hotel room.

My hubby's job doesn't allow for a lot of time off from work, so we're mostly trying to plan weekend trips after our initial week long trip.  There is a lot you can do in a weekend.  There are many campgrounds along the whole coast.  We can easily head to one & spend the whole weekend on the beach!  And based on what I've seen so far the prices are VERY reasonable in comparison to hotels.