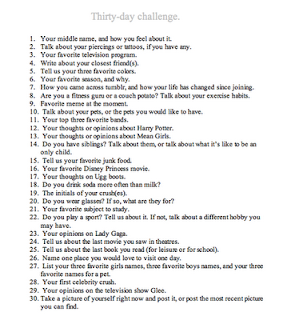 Day 1: my middle name & how I feel about it.
My middle name is Marie.  I've never liked it.  I always wanted a name that had some meaning to it.  My sister & brother's first names were chosen from the Bible.  My first name came from a character on a soap opera my mom was watching while she was pregnant with me.  My sister's middle name was our grandmother's middle name.  My brother's middle name was our father's first name.  Mine was chosen solely because it sounds good with the first name.  I've also noticed that there are tons of women with Marie, Anne, & Lynn as their middle names.  They just sound good with lots of first names.  My point is that I've never liked my middle name, mostly because it is far too common, but also because there's no meaning to it or behind it.  I don't say any of this in an angry way.  My name is what it is & it's who I am.  But if you really want to know how I feel about it, then there it is.  I was very careful in choosing my son's name because I wanted it to be special.  I've never felt like my name was special.
Posted by Frau Guten Tag at 2/13/2012 05:16:00 PM

I'm excited you've decided to take the challenge too!

Wow, we share middle names as well. Is there anything else we have in common? Hehe.

that is funny that we both have the same middle name!