I wrote a previous blog post about a book that I love.  It's a book about healing cancer with alternative medicine rather than traditional chemo & radiation.  I also mentioned that there is a detox plan in the book that I was interested in.  So I have been doing it these past few weeks.

You must do it in proper order.  You start with the colon cleanse, for one week.  Then you are supposed to do a candida & parasite cleanse for two weeks BUT by day 5 my bladder could no longer tolerate the parasite cleanse, due to having interstitial cystitis.  So I abandoned that one at day 5 & took a day off to soothe my bladder & then proceeded to the kidney cleanse, which is done for three weeks.  Then the final step is the liver cleanse.  It starts in the afternoon/evening of one day & is completed the following morning/afternoon.

I had 2 unusual stools during the colon cleanse.  I saw nothing unusual during the 5 days of the candida/parasite cleanse, & I saw nothing unusual during the kidney cleanse.  But with the liver cleanse I have passed MANY gall stones.  I have mixed feelings.  I am elated because the cleanse has worked, but at the same time I'm disappointed because I now have to repeat this liver cleanse once a month until I no longer pass any stones.

Here is a photo of just 3 of many, many gall stones that I passed.  I should add that as a nurse I've seen both kidney stones & gall stones & these are definitely gall stones.  Additionally they were passed through the intestines & not the bladder.

(Hope I didn't gross anyone out!) 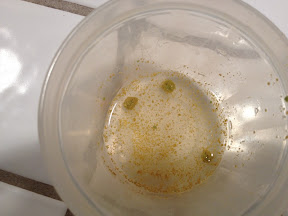