This week had some ups & downs.  This was a review week for letters A-D.  And it also focused on Joseph & the number 5.
{We are using Heart of Dakota's Little Hands to Heaven, Teach Your Child to Read in 100 Easy Lessons, & various sources for Spanish}
We started off on Monday with a new fingerplay, which both incorporated review of the past 4 fingerplays as well as the story of Joseph.  We read in the Bible about Joseph's special coat.  We painted a coffee filter to look like Joseph's coat.  We reviewed letters A-D.  We acted out & discussed what we read in the Bible.  This day was actually Labor Day.  My hubby still had to work & we received no invites to join a get-together with anyone we know, so it was basically a normal day for us.  So I chose to still do school but I also chose to discuss the fact that it was Labor Day & what that means.  Since I am a nurse I chose a Labor Day craft about nurses where we made nursing caps.  And I showed my son my very own nurse caps--I have 2, one for my LVN graduation & one for my RN graduation. (For LVN school I actually had to wear that cap every day in the hospital!  For the RN program we only wore it for graduation)  We did reading lesson #75.  I had thought he would nail this lesson on this day, but I guess he got a little rusty over the weekend & struggled with a couple of the words.  He's also struggling slightly with the new format/font the book recently presented.  Then we did Spanish & our songs--a song about Joseph, the books of the Bible, & God made the universe.
On a sidenote: there are LOTS of crafts out there about Joseph's coat.  I found 2 that I was hoping to get to, plus we also did the coffee filter one that was in our curriculum.  I was going to do one of them on Monday, but we already did the coffee filter one this day & we also had an extra craft added on, for Labor Day.  I ended up deciding to skip one of those coat crafts. 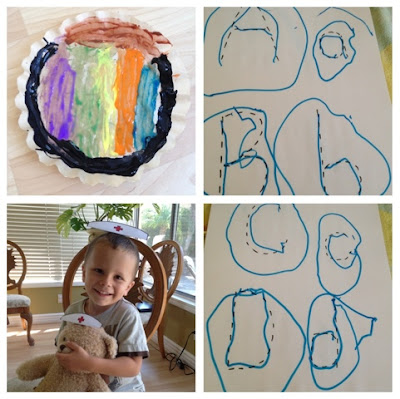 On Tuesday we continued with our fingerplay, we read more about Joseph in the Bible.  Being a review week, we reviewed our A, B, C, & D devotionals.....I only used the ABC Bible Verses book for this, not BOTH devotional books.  It was also masking tape day.....it said to choose one letter to review, but I chose to do all 4 letters, just made them a little smaller to make them all fit in the area I have to work in.  This time my son had an elephant walk on them, rather than having cars drive over them.  We did the "Count on Me" page.....drawing stripes--as in the stripes of Joseph's beautiful coat.  He did very well with this one. And we did reading lesson #75 (he's still struggling with "five" & "nine" because of the new format/font), Spanish, & our 3songs.
Each week my son has to memorize a Bible verse at church.  Last year, when he was 3, they had them memorize a new verse once a month.  But this year they have them memorize a new verse every week.  Because we're focusing on memorizing the one at church I haven't focused on having him actually memorize the one in his devotional for school.....but I've noticed he keeps talking about the verses we do in our devotional time.  So I'm starting to think that maybe he is capable of memorizing two verses each week.  I think when we get out of review week I will give it a try.  I think I will have to distinguish for him whether it's the "church Bible verse" or the "school Bible verse".  Has anyone else dealt with a situation like this before?  What did you do & how did it work out? 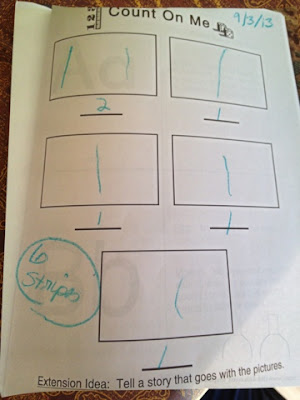 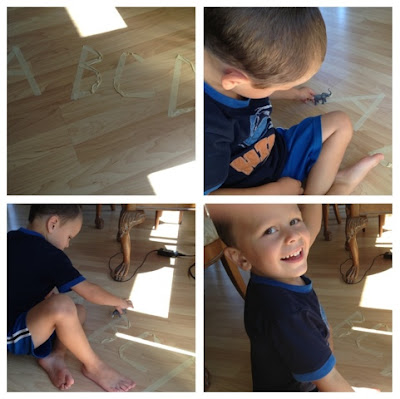 On Wednesday we continued with our fingerplay.  We read about Joseph being sold by his brothers.  We did an activity with money (coins).  My son is very interested in money.  I have told him some about it, but I spent more time on it today & explained it thoroughly, even though I know he doesn't yet comprehend it fully.  We sorted it into piles & counted it & then put it under a sheet of paper & drew crayon over it.  We did "hide & seek review".  We glued 5 wallets (again back to money, because Joseph's brothers sold him for money) to the number 5 page.  My son nailed every word in reading lesson #75 today, so Thursday we will move on to lesson #76.  We did Spanish also.  I had planned to do the Joseph's coat craft this day, but we had a scheduled power outage in our neighborhood on this day & the heat was affecting my son.  He wasn't as interested in school, wasn't enjoying himself like he usually does.  So I decided to postpone the craft.  I couldn't play the music CD either, I looked at the words for the Joseph song, but couldn't remember the tune, so I just sang the books of the Bible & God made the universe.  My son really enjoyed this & pulled out his drum & drummed & sang & clapped & danced. 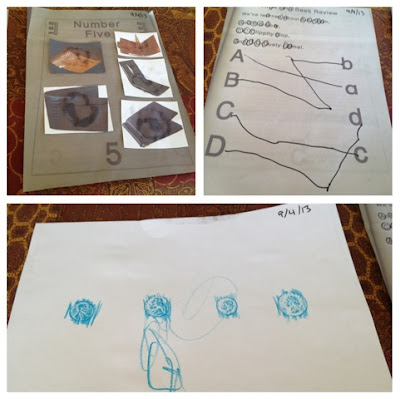 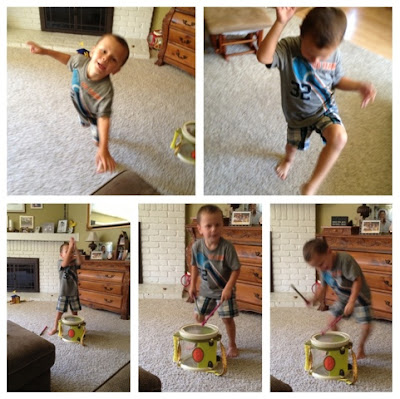 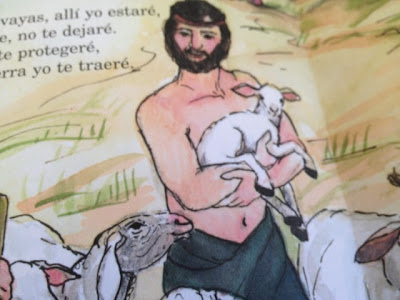 In our Spanish on Wednesday my son insisted that this sheep was going to get Jacob's belly button!!


On Thursday we had a tough day.  My son just wasn't focused on school & did not want to focus it seemed.  I'm sure there will be plenty of days like this in the future.  I offered to close the books & take the day off, but he didn't want that either.  My consequence for his behavior was that we skipped our music at the end of school for today.  I have to admit that I have a super crazy busy week going on, aside from school.  And I am trying hard to squeeze in school with everything else that is going on.  I am hoping that we can wrap up the week tomorrow easily & swiftly.  We did do our fingerplay & we read more about Joseph in the Bible.  We did two separate discussions on what we read in the Bible.  And I drew an A, B, C, & D & diluted glue.  My son painted the diluted glue onto the letters & then we covered them with cinnamon.  Even though it was a rough day I still did one of the Joseph crafts today.  I know tomorrow is going to be the busiest day yet for this whole week & there's no way I'll have time to do it & I already have 2 crafts lined up for next week, so I really wanted to get it done this week.  So I did it this day.  My son did really like it when we were done with it.  I'm planning to laminate it so he can play with it.  (The cut & paste camel we did the previous week I ended up laminating & he LOVES playing with it!)  Like I said before, I skipped the music for this day, so that was it for this day. 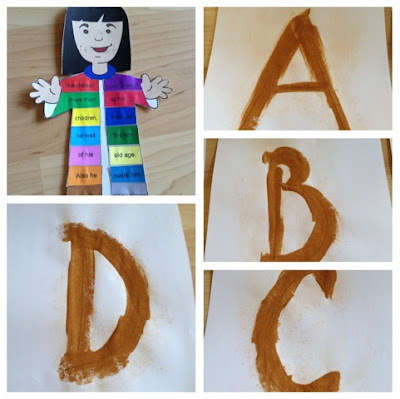 On Friday we wrapped up the week with another really tough day.  This is by far the busiest day of this very busy week for me.  We started out with our fingerplay, we read more about Joseph.  We did a dramatic play activity of what we read in the Bible.  I was supposed to review the letters A-D, but we've already done that a couple of times this week & he totally knows his letters & I was short on time, so I chose to skip this for this day.  There was another acting out the Bible activity that I skipped simply because it looked like it wouldn't be quick.  We started to do reading lesson #76 & when we got to reading the sentences at the end of the lesson he asked me to put it away.  He had an attitude about it.  I can tell he's still upset because I cut our lesson short the previous day due to bad behavior.  I put it away & then he asked to do music.  I told him there was no music because we didn't finish reading.  Then he asked to watch TV & I told him there was no TV because he didn't finish school.  He wasn't too happy, but I do think it's an important lesson to be learned & I'm glad he's learning it early on.
So that was our school week.  It was crazy busy & we had some behavioral issues.  Not exactly a success in my opinion, but that's life.  We still have one more week of learning about Joseph ahead of us.  And then onward to Moses.