We had another great week!  We started a new fingerplay that focuses on the letter D.  We are learning about Isaac & Rebekah & Jacob & Esau this week.  And the number 4 of course.  We are using Heart of Dakota's Little Hands to Heaven, Teach Your Child to Read in 100 Easy Lessons, & various forms of Spanish.

On Monday we did our new fingerplay, did our Bible reading, then did some acting out & discussing of what we had read.  I had my son trace his finger over "D" & "d" & he did really well.  So far the only letter he has been able to write independently & legibly has been "A" & "a".  We put 4 women on the #4 page.  I was trying to decide what sort of women to choose to put & decided on women with their Bibles.  I had planned to do reading lesson #73 today, BUT my son asked to do reading on Saturday & we did it that day (for the first time mind you) & he nailed every word, both old & new the first time through the lesson so today we did lesson #74.  There were changes in this lesson that made it a little more challenging for him, so it will be interesting to see how long before he nails this lesson & adjusts to the new format.  We did Spanish of course.  And our extra craft was a cut & paste camel.  The glue has to dry before I can let my son play with it, but he's pretty excited about it.  And there was no song to go along with today's lesson, but we still listened to the Books of the Bible & God Made the Universe.  Incidentally, as of last Friday I have the Books of the Bible song down except for the minor prophets.  I had previously learned the books of the Bible in order (just not in a song form) & I was able to memorize all of it EXCEPT the minor prophets.  But I'm betting I'll have it down soon enough.  It's always easier to memorize when you sing it. 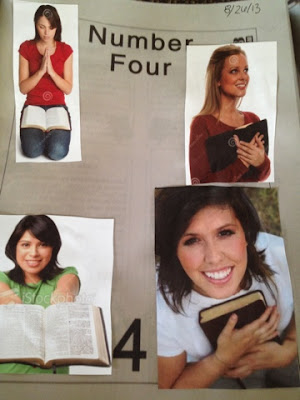 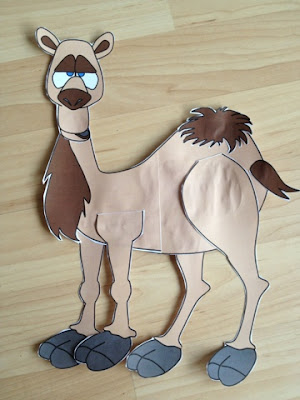 On Tuesday we continued with our fingerplay & read about Jacob lying to Isaac.  On a paper I wrote out my son's name with the letters dashed.  My son then drew over it, connecting the dashes into a solid line.  He did really well at this.  (And this gave me an idea to use this again with each letter to help learn how to write each letter of the alphabet)  He was supposed to color all over it & try to hide his name, but he didn't want to, he was too proud of his work he had done.  There was a lesson behind it, that Jacob tried to hide who he was from his father Isaac, so we just discussed that instead.  Today was "masking tape D" day.  This is always an exciting day for my son.  He quickly decides which cars he wants to drive over the masking tape & runs to get them & he sooo enjoys driving the cars over the letter.  And we did some acting out & discussing of what we read in the Bible today.  Then we did reading lesson # 74 again & Spanish & our songs--a song about Essau & Jacob, then the books of the Bible & God Made the Universe. 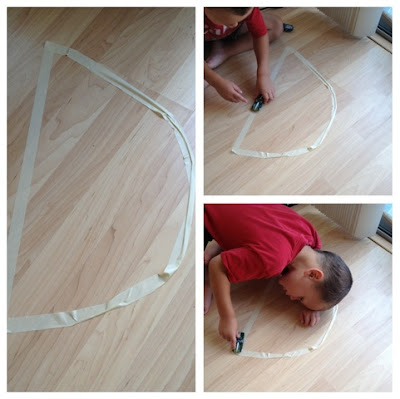 On Wednesday we continued with our fingerplay, we read about Jacob meeting & marrying Rachel & about Jacob's dream.  We did some acting out of what we read, we did "hide & seek D" (which my son loves & is good at).  He drew ladders & then we counted them & added it up using legos.  He's very good at this activity as well.  He nailed reading lesson #74, so tomorrow we'll be moving on to lesson #75.  We did Spanish & then an extra craft about Jacob's dream & then finished up with our songs.  Despite sounding so short here as I type, this was a longer day for us.  Which was good timing, as Monday & Tuesday of this week were very busy days for me & it would've been challenging to fit in a longer day of school.  I was very relaxed today simply because I don't have a million things needing to be done like I have so often lately.  Cutting out all the stuff for the craft did take up some of that time also.  I really should try to get that sort of stuff done ahead of time I guess........
My son was upset that the craft had stars but no moon!  I happen to have a moon punch, so I punched a moon on the paper for him (it's on the upper left, got cut out of this photo).  Then he wanted MORE stars.  I happen to have a star punch, so we used that several times as well.  He was very pleased with the end result. 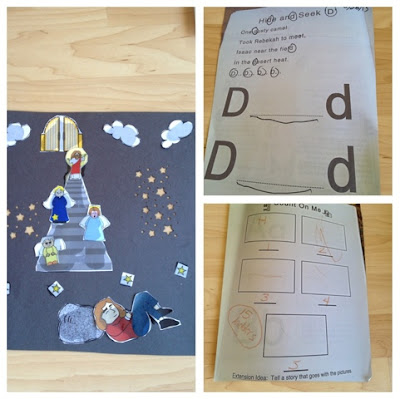 On Thursday I actually timed our school day for the first time!  It took us exactly one hour.  Now I must add that I chose to leave one activity out today that was in our lesson plan but I also added on an extra craft.  Knowing this makes me less nervous for next year however.  Since it says that next year's curriculum can be done in 90 minutes each day (you can, of course split it into multiple smaller blocks of time if needed).  I had felt that going from only 20 minutes to 90 minutes was a huge jump & might be a bit of a challenge for my son, but if we're already doing an hour & my son is doing fine attention-span-wise, then I feel good about next year.  I do realize that on top of the 20 minute curriculum I have added reading lessons & Spanish lessons & 2 additional songs & sometimes an additional craft.  And I really focus on relaxing & taking our time & enjoying the process, not rushing at all.  If nothing else I want my son to know that "school" & learning are FUN.  Today's society has such a negative connotation in regards to school.  I feel so strongly that it doesn't need to be that way at all.

Anyways, getting back on track: today we continued with our fingerplay, we read about Jacob wrestling with an angel.  There was an activity where we were supposed to act out what we read using a balloon that I chose to skip.  I don't have a balloon on hand & I considered the fact that I could use a ball, but I just felt that it was gonna be tough to illustrate what I was supposed to, so for me I chose to skip it entirely rather than just confuse my son.  I drew a big "D" & put glue over it & my son put dry pasta on it.  And we did act out the Bible story we read using stuffed animals.  I liked this acting out activity & felt that it did illustrate what it was supposed to well, so I did do this one.  Then we did reading lesson #75 & Spanish.  We did a craft, making an angel out of a toilet paper roll.  I cut out all the template pieces yesterday, thank goodness, or that would've made our school day much longer than it already was.  And then we did our 3 songs.

On a sidenote: I recently purchased a laminator.  I am working on a project where I'm making something for my son, to hang in his room.  Initially I had asked my hubby if he had one & he said no, but that we could probably get one from Costco.  I know nothing about them & looked at Costco.com & they had one for $100.  So I assumed they were expensive items.  Not wanting to spend that much right now I tried to borrow one from someone.  (I know I could go to Staples or something like that, to get my stuff laminated but there was quite a bit that needed to be laminated & I knew that would be pretty pricey)  But then a blog on my blogfeed had a post about items needed for homeschooling, with recommended brands, etc.  There was a laminator listed for $25 with refill packs for $14.  So I went ahead & purchased that one.  I am very happy with it so far.  I was able to laminate all that I needed for my project & then I did a few other things.  Since Tuesday, when I wrote out my son's named in dashed letters & he traced over it so well, I've been meaning to have my son trace over other dashed letters.  Yesterday I realized that if I laminated them he could use the same one over & over with a dry erase pen!  So I did that yesterday & he did the first 4 letters today, getting caught up.  I thought he did a really great job.  I put 2 letters, both upper & lower case, on each side of the sheet.  I ended up with an empty side at the end of the alphabet, so I put numbers there, 0-9, just to not have wasted space. 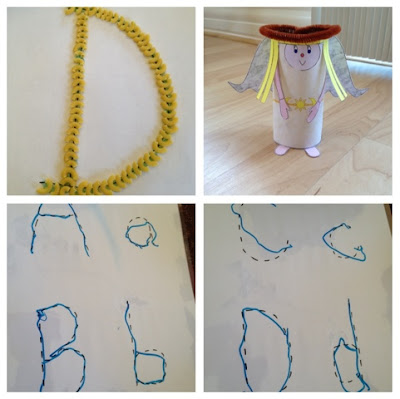 On Friday we finished off the week with our fingerplay, we read in the Bible about Esau forgiving Jacob.  We did our devotional today, I'm still doing both books.  I was supposed to have my son paint the letter "D" with a choice of: chocolate syrup, baby food, or fingerpaint.  But I already know my kid well enough to know that that is not going to go over well at all.  He LOVES to paint with a paint brush though, so I set him up with tempera paint & his paint brushes & let him paint a "D".  He wanted to paint it grey he said, so I mixed black & white together to make grey for him.  He was amazed to see me put in black & white & it became grey!  We did some acting out of what we read in the Bible today.  We did reading lesson #75, then Spanish, & then our music. 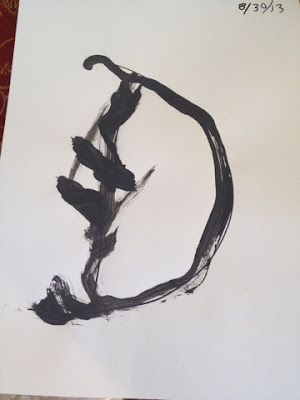 Onward we go to next week, where we learn about Joseph.

I replied to your comment about Spanish at my blog but in case you don't see it, we are using Getting Started With Spanish. I also incorporate Salsa Spanish videos and Instant Replay Spanish videos. I really like GSWS. I have tried several other Spanish curricula and this is my favorite. GSWS teaches the basic Spanish words and has you speaking full sentences not just vocab. Each lesson has sentences to practice and translate. The sentences get longer and more complex as you learn more words. GSWS also teaches basic grammar. We actually started it last January and are picking up where we left off. I mostly do this with my 10 and 7 year old but the younger ones watch the videos and listen in. :)