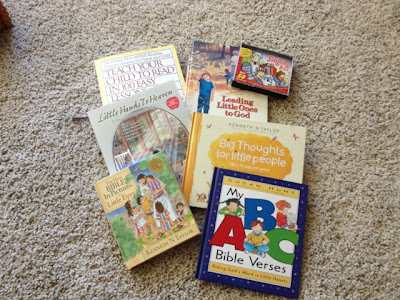 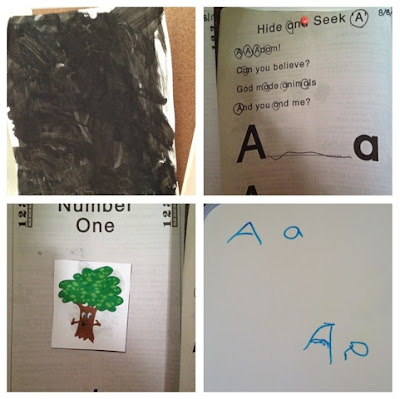 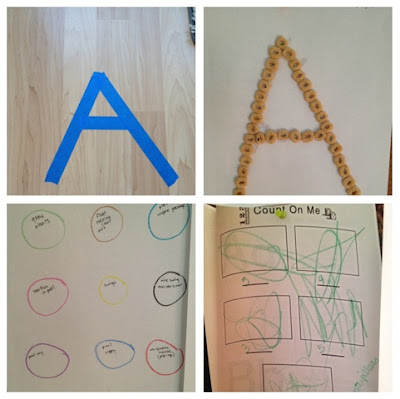 I am sure I'll continue posting updates on homeschooling, though I'm not sure how frequently I'll be doing that.  This week has been super exciting for me, so it was all I could do to wait for the week to finish to be able to post this blog.  I'm imagining some seasoned & burned out homeschooler reading this & snickering to themselves.  Yeah, I know, I'm brand new at this, but it's super exciting to me.  It really is.

So week one was all about the creation & Adam & Eve & the garden of Eden & their sin & we finished off the week learning about Cain & Abel.  The focus was also on letter A & the number 1.

When I was buying supplies that I needed to do this curriculum I made the decision to add on a dry erase board.  And I am so proud of myself for doing that & so glad that I did that.  We've already been using it this week.  My son loves to practice writing "A" & "a" & to draw on it.  He also loves to paint.  There was painting involved on day 1 & so after school was finished he was begging to paint.  Three days in a row after school was finished I set him up with his watercolors & let him paint.  And the last 2 days he used the dry erase board to write & draw.

The curriculum is set up to teach the NAME & SOUND of each letter in the alphabet.  But my kid learned his alphabet (both upper & lower case) when he was 2.  And he started reading lessons (where he is learning the sounds each letter makes) when he turned 3.  (he is now 4)  So I quickly (on day 1) made the decision to focus on him WRITING the letters.  I have hesitated to teach him how to write because I'm really not sure if he's left or right handed.  I am left handed & my husband is right handed.  And he is always switching back & forth, so it's really hard to tell.  When I was in kindergarten they knew I was left handed so I'm guessing by next year we should be able to tell for sure?  I'd love to hear from other parents--did your kids switch back & forth between hands for eating, brushing teeth, drawing, etc??  And by what age were you able to determine which hand they preferred?  I guess I'm hesitating because I don't want my left handed demonstration of writing to influence him into using his left hand.  On day 2 I put a giant A on the floor using masking tape.  I had him drive cars over it to get familiar with the shape.  Then he started tracing with his finger.  That really got me thinking that he might be ready to start learning how to write.

The curriculum I'm using says it can be done in 20 minutes a day.  I haven't actually timed us.  But we also do a reading lesson & a Spanish lesson in addition to the preschool curriculum.  At some point I will probably time us, just out of curiosity.  But I must admit that the statement "it can be done in only 20 minutes a day" makes me feel pressured to rush.  And on the first day I was starting out sort of rushing & then decided to relax & ENJOY the process.  And there's been no rushing since.  I realize that only having one child is a huge plus for me.  I don't have to worry about anything else, just focus on schooling him.

One thing I love about this curriculum is that it's slightly "crafty".  I have never learned how to do any sort of crafting.  So it's teaching me how & giving me ideas to build upon.  I have to say I really like this kid crafting stuff.

So on day one I was supposed to take white paper & draw on it with white crayon things that God created.  I drew a sun, a moon, stars, a tree, a cow (I had asked Lil J what animal he wanted & he wanted a cow), & Adam & Eve.  Then I was supposed to dilute black tempera paint & have my son paint over the whole thing & all the things I drew were supposed to magically appear.  The key idea is that God created everything out of nothing.  Only I guess I didn't dilute the paint ENOUGH & it didn't turn out as well as it should have.  Maybe I'll make a second attempt tomorrow (since I can't imagine NOT doing school tomorrow, LOL).

On day 2 I drew circles of different colors on a paper & asked Lil J to identify the color (he knows his colors really well, it was easy for him) & then to name things around him that are that color.  He did REALLY well at this.  I was pleasantly surprised.  We did a little math on day 2 also.  I'm not sure how well he comprehended this, but we did it.  I used his legos to assist in the addition, but this was my doing, the curriculum doesn't state to do that.

On day 4 we did "Hide & Seek A".....a page where he needs to find all the "A"s & "a"s & he did really well.  We also talked about the number 1 & glued ONE tree to the number 1 page.  I had done a google image search for trees & loved the one I had found.  And Lil J really loved it also.  This project went over really well.  On this day I actually pulled out the dry erase board & had him attempt to draw As & he did REALLY well in my opinion.

On day 5 I was supposed to have him either draw As with a bar of soap on a mirror OR with ice on construction paper.  Since I don't have any bar soap in the house I went with the ice on construction paper BUT he didn't like the ice, didn't like that it was cold & wet, he wouldn't do it.  (he's EXTREMELY picky about texture of things)  So I again pulled out the dry erase board & let him do it there.

There's a lot of other stuff.  Each day there's a "finger play" & it changes each week.  That was a lot of fun, I just sang it & there's hand motions that go along.  I did some modifying with it since it said to get on the floor & do animal motions.  I know my kid & if we're just getting started (it's the first thing to do for the school day) & I'm getting up & down & moving all around he's gonna get super stimulated & excited & distracted & just want to play.  So I chose to just stay seated & do hand motions for the animals instead & it worked great.  There's also a Bible reading each day & questions afterward.  There's a lot of acting out Bible scenes & dramatic play.  And we discuss how things went & what God thinks about how it went & how it SHOULD have went.  There's a devotional once a week.  And each day is supposed to end with a song.  So the first day I went through all of it & then went in his bedroom to play the song.  And he got very distracted in his bedroom with toys, books, etc.  THEN I still needed to bring him back & do reading & Spanish.  It didn't work so well.  So now I go through all of the school day lesson EXCEPT the song.  Then I do reading, then Spanish, & then I play the song on the DVD player (it plays CDs) in our living room where there's very little to distract him.  I started that routine on day 2 & have done it each day since & it has worked great.

I did finish looking ahead all the way to the end to see if the supplies I purchased will cover the whole curriculum.  Initially I had looked at the first 2 months & made a supply list off of that & what I was noticing that it just kept using the same things over & over but rotated it in a way to keep it from being monotonous or boring to the child.  I was pretty much right, except twice I saw it using pretend food (I don't have any of that) & it also mentioned popsicle sticks, which I don't have but was already planning to look for.

I would try to post pics of the school work we did this week, but I'm having a really hard time inserting photos in the blog lately.  Once I get that figured out I will definitely do so.  In the meantime I have posted them on both Facebook & Instagram for those who are friends with me there.

I'm so glad you loved it! We can do LHTH in about 20 minutes, but then we add in the Rod & Staff "About Three" workbook and my son will work in there for 5 or so minutes.

If there is any painting involved, or if we're really having fun with an activity/drama box sometimes we'll go a little longer.

As for left/right handedness, I think that it generally is pretty solidified by late 4 yr old or somewhere in the 5 yr old range for an average child. My son turns 4 in 2 weeks, and he uses his left hand about 90% of the time...but once in a while, he still likes to try his right hand.

I'd be curious to see what other moms say about the left/right hand thing :)