So this was another fun filled week for us.

On Monday we started a new fingerplay, which focused on the letter B--this will be repeated each day this week.  We started reading about Noah this week.  We also introduced the letter B & the number 2, which he already knows extremely well.  On our number two page we glued 2 hands, representing God's hands, which Lil J glued onto the page.  We did our devotion on Monday this week.  I'm actually doing 2 devotions for now.  For his age the curriculum I'm using recommends one devotional book (ABC Bible verses) & for younger children they recommended a different book (Big thoughts for little people).  I already had ABC Bible verses, so when I placed my order I ordered the package with Big thoughts for little people instead.  I figured I could compare the two & choose one.  but so far I'm just doing both of them & Lil J doesn't mind.  They are both a little different, but both good.  (On a side note, in my teacher's manual there is a third devotional option listed, but I never saw it mentioned anywhere else.  Not sure what that's about.)  This week we're doing a song about Noah.  Lil J also asked for a song from last week.  So I made the decision to keep on playing two other songs with whatever our current song is.  One of the songs wasn't used in our curriculum, but it's on the CD.  It's a song that sings through the books of the Bible, in order.  I think it would be great if he could memorize that at  young age.  (And memorizing is super easy when you sing it!)  The other one we did play through most of week 1 & he keeps asking to hear it.  It's about the 7 days of creation.  I think that's another great thing to memorize at a young age.  So from now on I'm planning to play whatever song goes along with our lesson & then those 2 songs additionally.  My son loves music, so I really don't think he'll mind.  I always sing the songs out loud & he dances around & sings the portions of them that he can remember.  Of course mom cheats with the lyric sheet in hand, LOL.

On Tuesday we continued with the B fingerplay & the story of Noah.  We did some acting out of Bible stuff & a little math as well.  Our letter activity was to draw a big B on paper & then either paint it (with fingerpaint or paint & paint brush) or use play dough.  I felt like this was a really short day for some reason, it went really fast, so we actually did both.  I had him paint a big B with his water colors on one paper & then we did a play-dough B on another paper.  This was his first time working with play dough.  Of course we also did a reading lesson (he's doing REALLY well these days with the reading) & Spanish.  And we ended with our songs.

I must add that while he did SO well last week with writing the letter "A" & "a" I must say that this week his "B" & "b" were not legible at all.  I tried to work with him on it, but he quickly became frustrated & didn't want to try anymore.  But he did paint the B outline extremely well & traced the B shape with his finger extremely well.  I'm sure he just needs a little more time to develop his fine motor skills.  And who knows if he's even writing with his dominant hand, which can make a HUGE difference! 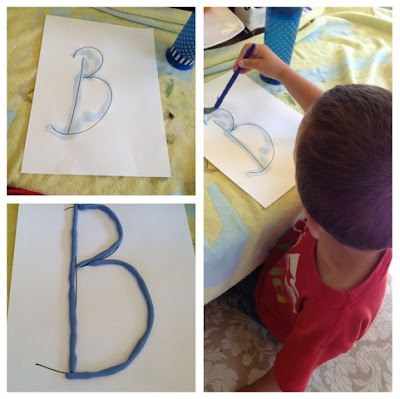 On Wednesday we continued with fingerplay & the story of Noah.  We did a sink/float experiment & talked about how God specified how the boat was to be built to ensure that it wouldn't sink.  We did "hide & seek B", my son is really good at this one.  And we did some math.  My son never follows directions on the math it seems, but I think if he did it would be too simple for him.  So last time it was caterpillars, he was supposed to draw ONE in each box & he drew a lot in each box.  This time it was rain drops & again I told him to draw ONE rain drop per box but he drew a whole lot.  So I pulled out his legos & helped show him how to count them all & add up the numbers.  Last time I wasn't sure he was comprehending it but this time it sure seemed like he did.  He counted right along with me.  And again we did a reading lesson, we moved up to lesson 70 (out of 100).  And we did some Spanish & then listened to our 3 songs again. 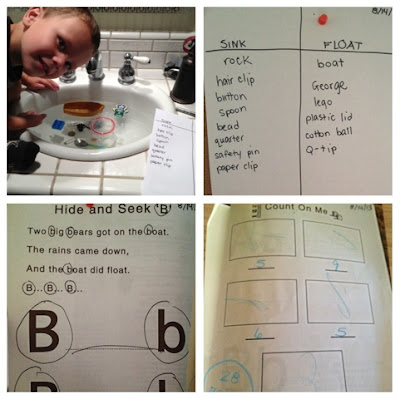 I'm starting to come to the conclusion that this curriculum is a little too simple for my son.  (It's for ages 2-5, so he's certainly not too old for it, but the next level up sure seemed above his comprehension to me.)  But I think it's a good problem to have.  It means that he's smart, or at least that he's not behind or developmentally delayed in some way.  But I'm trying to think of ways to beef up the curriculum slightly.  For starters I think I'm going to try to add on a craft or two each week.  And I'm going to keep looking for other ideas.  If anyone has any suggestions, please feel free to leave me a comment.  I would definitely prefer that it's too easy than it be too hard.  And this is just the beginning, I want to ensure that if nothing else, he takes from this experience that LEARNING IS FUN.

On Thursday we continued with the fingerplay & read the finale of the story of Noah.  We made a rainbow out of construction paper.  We did the big masking tape B on the floor.  My son was really excited about this.  He ran to get two hot wheels to drive all over the B & then he traced it with his finger also.  Then we did some acting out of what we read in the Bible.  We did the reading lesson & Spanish.  Then we did an extra Noah's Ark craft that I had found.  Then we finished up with our songs.  I had planned to do one more Noah craft that I had found, but as I was starting it I was getting confused & annoyed by the instructions & so I quickly decided to scrap the idea.  Crafts should be fun in my opinion & if I'm not having fun my son certainly isn't going to have fun.  And one extra craft seems like plenty already anyways.  So it's all good. 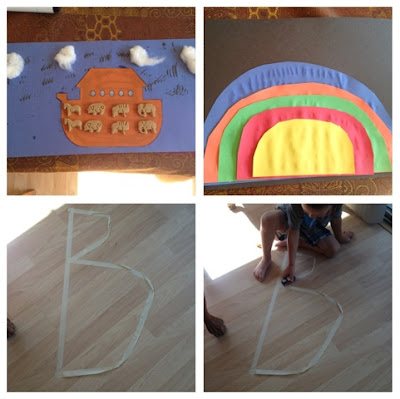 On Friday we finished up the week continuing our fingerplay & then reading about the tower of Babel in the Bible.  We built a tower out of blocks & turned it into math by counting the bocks as well.  We discussed what we read in the Bible & acted out a scene alternately--one way being prideful & one way giving the credit to God & discussing the differences & what God thinks & what God prefers.  I had him trace his finger over the "B" & "b" & he does great tracing but then he was supposed to write them with 2 crayons taped together.  It wasn't working so well so I just gave him ONE crayon & he tried but gets frustrated quickly with the letter B & didn't want to try anymore.  At his age I don't see any reason to push him on this yet, so we just moved on quickly to the craft that I had added on--about the tower of Babel.  Of course we did our reading & Spanish as well.  And there was no song to go with this lesson, but I did play the other two that I mentioned previously--The Books of the Bible & God Made the Universe. 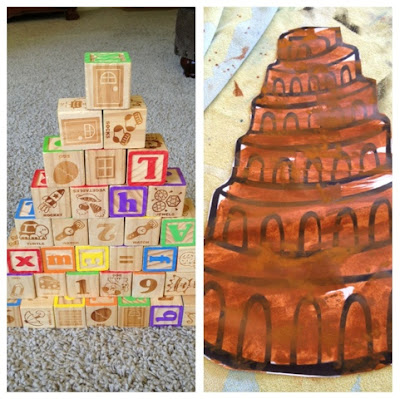