I am using Heart of Dakota's Little Hands to Heaven, Teach Your Child To Read In 100 Easy Lessons, various forms of Spanish, & reading aloud from a chapter book for my 4 year old son.

On Monday we started a new fingerplay, he read the words portion of reading lesson #81, we read in the Bible about Joshua.  Being a review week, we reviewed the E, F, G, & H devotionals.  For week to week devotionals I use both devotionals offered by Heart of Dakota, but for reviewing I only use ABC verses.  Then we reviewed A-H in handwriting, using the tracer sheets I made.  Then he glued 10 men onto his number 10 page (10 men to represent the Israelite men).  Then he read the sentences/paragraph portion of reading lesson #81.  I had to remind him to focus, but he did better than last week I am happy to say.  Today happens to be Columbus Day, so I gave Lil J a very brief run down of what that means & then had him color two pages about Christopher Columbus.  I had tried to find a craft for Columbus day, but only found 2 & while I did like one of them it required 2 milk cartons, which I don't have.  And I didn't want to go spend money on milk just to dump it down the drain in order to make this craft.  So then I looked for coloring pages & liked the 2 I chose.  Then we did Spanish & there was no song to go with today's lesson, but we did sing Books of the Bible & God made the universe.  I do believe Lil J knows both songs all the way through.  I am so proud of him!  Later on we will continue reading from The Black Stallion. 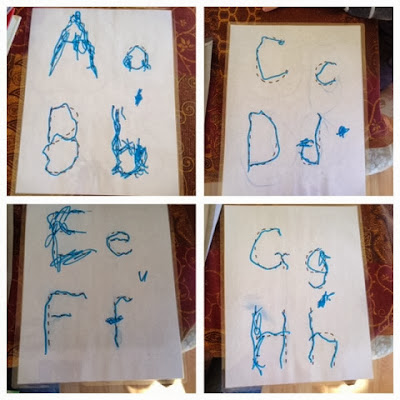 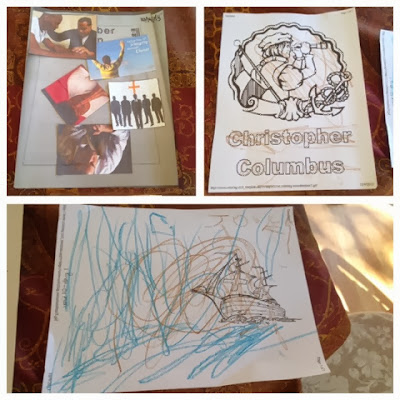 On Tuesday Lil J was begging to do school outside.  He's actually been asking for a long time now, but I always forget & he usually remembers half way through our school session & it's just too late at that point.  The weather is gorgeous here right now, so we headed outside & prayed, did our fingerplay, he read the words portion of reading lesson #81 (& totally nailed it, moving on to lesson #82 tomorrow).  Then we read about Rahab helping the spies in the Bible, he read the sentences/paragraphs portion of his reading lesson, & then we did Spanish.  Then we headed inside to do our masking tape letter on the floor.  Since it's review week it says to choose a letter from A-H.  Lil J said he wanted to do "G" & he drove one of his choo choos on it.  Then it said to build the wall of Jericho out of crackers & peanut butter.  I happen to have no crackers in the house right now.....and we don't even eat peanut butter.  We do eat almond butter BUT I have very little on hand right now & didn't feel like making another batch right now just for this.  Plus, who's gonna eat all these crackers & almond butter?!?!?!  So I scrapped this idea & we built the wall out of his blocks & added on Rahab's red rope using a red pipe cleaner.  We were supposed to act out what we read in the Bible, but I chose to just discuss it instead.  And then we did our songs--a song about marching around the wall of Jericho, the books of the Bible, & God made the universe.  Since I've been singing those last 2 songs without the CD I've been thinking that a tambourine would sure be nice.  I used to have one, but I think I got rid of it when I moved....about 8 years ago.  Then I remembered that Lil J has one, a small one that came with the drum he got for his first birthday.  I went to grab it but as soon as Lil J saw me using it he wanted to use it.  So I sang & he danced around playing the tambourine.  It was very nice.  Later on I will read aloud from The Black Stallion & that's all for today. 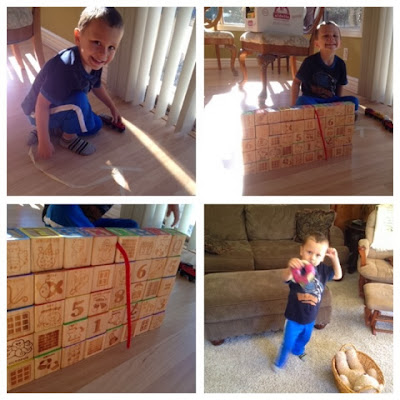 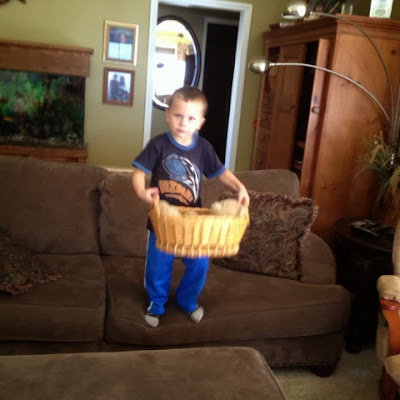 On Wednesday we continued with our fingerplay, he read the words portion of reading lesson #82, we read in the Bible about Joshua leading the Israelites across the Jordan river (& God drying up the water for them to cross).  Lil J picked "G" again as his review letter, I put glue on a paper in the form of "G" & then sprinkled baking soda over it.  I used a blue glitter glue, but the baking soda didn't really adhere very well.  Not sure if that's just how baking soda is or if it's because I used a glitter gel glue.  It would've looked much better if I had just done the glitter glue alone without sprinkling anything over it.  We were supposed to act out & discuss what we read in the Bible this day.  We did discuss, but I passed on the acting out.  We've been a little under the weather & just didn't feel like it.  Based on our discussion I could see that he had a good understanding about the lesson anyways.  Then he read the sentences/paragraphs portion of his reading lesson.  Then we did Spanish & listened to our songs--a song about crossing the Jordan river, the books of the Bible, & God made the universe.  As soon as Lil J knew it was music time he ran to get his tambourine.  But this time he wanted ME to play the tambourine rather than himself.  He chose to ride his horse during music time this day.  Later on we will continue with the Black Stallion. 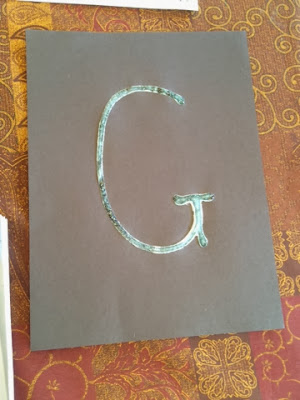 On Thursday we continued with our fingerplay, he read the words portion of reading lesson #82 (& will be moving on to lesson #83 tomorrow), we read in the Bible about the wall of Jericho coming down.  He did 'hide & seek review EFGH' & 'count on me', drawing horns in the boxes & adding up all the horns.  Then he read the sentences/paragraphs portion of his reading lesson. Then we did an extra craft, making a horn, & then we acted out what we read in the Bible.  We built a wall out of blocks & he marched around it 7 times & then blew his new horn & the wall came down.  He really enjoyed this (& even after school was over he kept doing it over & over).  Then we did Spanish & our songs--a song about the wall of Jericho, the books of the Bible, & God made the universe.  Along with the added tambourine by me, Lil J blew his new horn during the songs.  He really enjoyed doing that.  Later I will read aloud from the Black Stallion & that's it for Thursday. 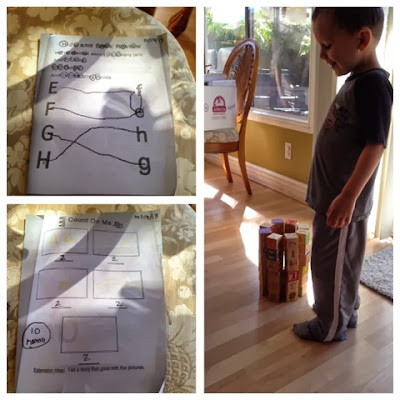 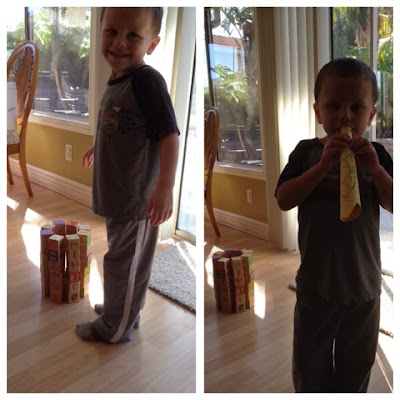 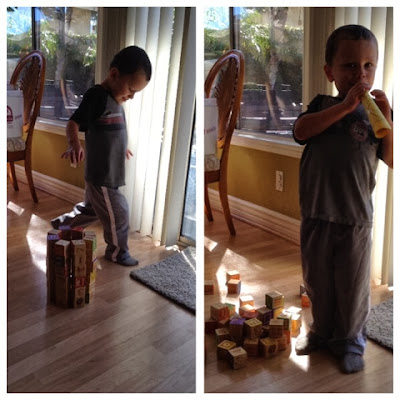 On Friday we finished off the week continuing with our fingerplay, he read the words portion of reading lesson #83, we read in the Bible about God not allowing the sun to set.  We discussed the concept of time & he watched 1 minute pass on a stopwatch.  We discussed what you can accomplish in one minute.  When I asked which letter he wanted to review for handwriting he wanted "G" (he seems to really love G LOL).  And we did some acting out of what we read in the Bible.  Then he read the sentences/paragraphs portion of his reading lesson, then we did Spanish.  There was no song for today's lesson, so we just sang our usual books of the Bible & God made the universe.  And then he was asking to paint, so I set him up to paint.  I love it when he paints.  Later I will read aloud from the Black Stallion & we'll be done for this week..... 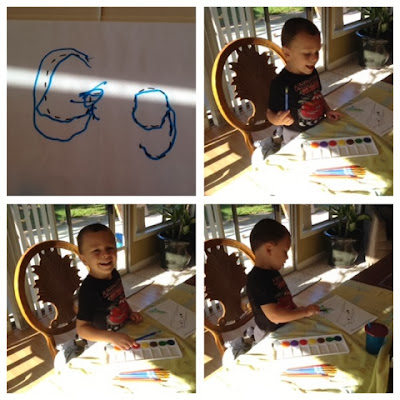