I am using Heart of Dakota's Little Hands to Heaven, Teach Your Child to Read in 100 Easy Lessons, various forms of Spanish, & reading out loud of a chapter book for my 4 year old son.

This week's lessons focus on the letter H, the number 9, & Moses.

On Monday we started off with a new fingerplay, he read words in reading lesson #79, we read in the Bible about Moses & the 10 commandments.  He practiced writing "H" & "h" on the tracer letters I made.  He did 'count on me', drawing 2 stones (stones because the 10 commandments were written on stones) in each box, then counting the stones in each box & then counting ALL the stones together.  Then we did an activity that I didn't feel really conveyed about God giving the 10 commandments to Moses, but we still did it anyways.  Lil J applied stickers to a sheet of paper, as many as he wanted, & then he counted them all.  Then he split them into groups of 10.  He had put exactly 20 stickers so he had 2 groups of 10.  Then we did an extra Moses craft together & then he read sentences/paragraphs in his reading lesson.  Then we did Spanish & then our songs--a song about the 10 commandments & our 2 usuals.  We just need to still read out of the Black Stallion later & then school will be done for the day. 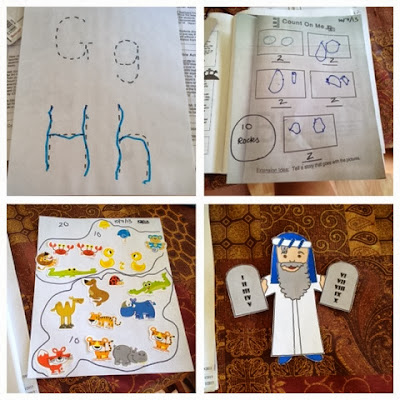 On Tuesday we continued with our fingerplay, read the words portion of reading lesson #79, which he totally nailed, so we'll be moving on to lesson #80 on Wednesday.  We read in the Bible about the people praying to the golden calf & about Moses talking to God.  We did devotional time, using both books. I am so amazed because Lil J is reading more & more out of the devotional books! Even though he is reading in his reading lesson book I am amazed to see him reading in another book like that. Then we did a "raisin H", where I drew a big H & put glue on it & Lil J placed raisins in the glue.  He had to tell me that he doesn't like raisins (even though he's never actually tasted them) the entire time he was doing this, despite the fact that I kept telling him he didn't have to EAT them, just to put them on the H.  We discussed what we read in the Bible & prayed specifically about what we read.  We did an extra Moses craft-a toilet paper roll Moses.  I sooo love toilet paper roll crafts & so does Lil J!!  Then he read the sentences portion of his reading lesson--he did EXTREMELY WELL today, focused the whole time, because I made home-made lollipops on Sunday & he was asking for one right before we started school & I told him if he behaved & stayed focused during reading he could have one.  I am glad to finally see that he is actually capable of such a thing.  I just need to find the right incentive or motivation.  And no, I don't think candy is a good idea, at least not on a regular basis.  Then we did Spanish & then our songs--10 Commandments, books of the Bible, & God made the universe.  And later I will read aloud from The Black Stallion. 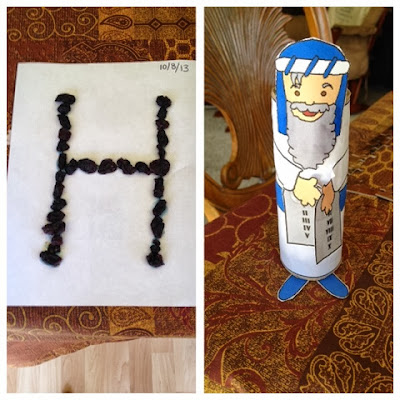 On Wednesday we continued with our fingerplay, he read the words portion of reading lesson #80, we read in the Bible about the Israelites bringing gifts for the Tabernacle, he did 'hide & seek H', which he's really good at. He glued 9 bottles of perfume on the #9 page--perfume bottles because that was brought as gifts for the building of the tabernacle.  We built a tabernacle & sprayed perfume on it also.  Then he read the sentences/paragraphs portion of reading lesson #80.  He was not at all focused & it was very difficult.  I told him if he didn't focus that there would be no TV today.  About the last third of the sentences he got very focused.  I will give him the opportunity later to repeat the lesson in a focused manner if he wants to earn back his TV privilege.  I feel I need to teach him to focus properly on his schoolwork.  I know that he is perfectly capable of doing so, he just doesn't want to.  Then we did our songs--10 commandments, books of the Bible, & God made the universe.  And later I will read aloud from The Black Stallion.  Incidentally he asked to do 'count on me' today--I reminded him that we already did it on Monday, but I thought it was cute that he asked for it, thinking we had forgotten to do it. 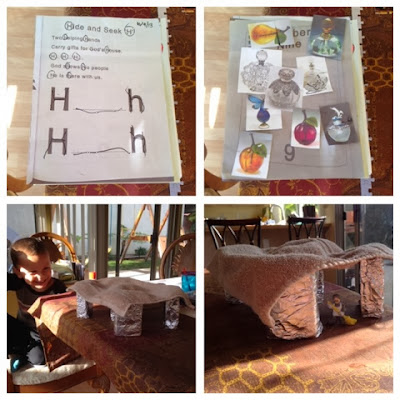 On Thursday we had a rough day.  My son is going through a phase of intentionally challenging me & he was determined to undermine school on this day, as part of his challenging.  I will spare the details, but I did manage it well, although it was still challenging in my opinion.  We did our fingerplay, we read the words portion of reading lesson #80, we read about God leading his people in the Bible, he practiced writing "H" & "h".  We acted out & discussed what we read in the Bible.  I once again modified the acting out activity.  I let his toys act it out rather than me & him acting it out, it's just easier to keep him focused that way.  Then he read the sentences/paragraphs portion of his reading lesson--he did VERY well on this today.  Then we did Spanish, then our songs, & later I will read aloud from the Black Stallion.  That is all for Thursday.......... 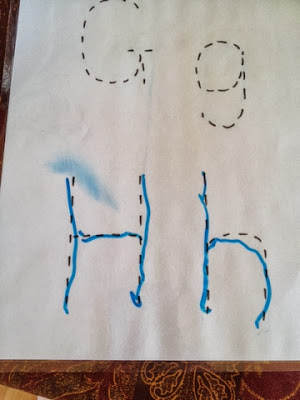 On Friday we continued with the fingerplay, he read the words portion of reading lesson #80 (which he totally mastered, will be moving on to lesson #81 on Monday), read in the Bible about the Israelites not trusting God & wandering for 40 years.  He made a grapevine because we read about the Israelites finding grape vines in the land of Canaan.  Today was masking tape H day, which my son loves.  He drove his motorhome all over the H.  We discussed what we read in the Bible today, he read the sentences/paragraph portion of his reading lesson, he struggled a little with focus/concentration during this, but not as bad as usual, so I'll call that progress.  We did Spanish, & listened to our songs--one about wandering for 40 years & our 2 usuals.  Later on I will read aloud from The Black Stallion. 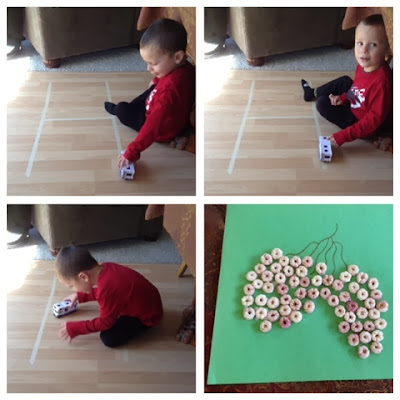