Several months ago, I'm not sure exactly when, but I'm pretty sure it was sometime within the last 12 months, I ran across information about a project that I fell in love with.  It correlates with the homeschool curriculum I am using for my son.  If we continue at the pace we are going it will probably be Lil J's 2nd grade curriculum.  If we happen to slow down before getting there it could possibly end up being his 3rd grade curriculum I suppose.

As I've mentioned before (many times I'm sure) I am sooooo not crafty.  I've honestly never had any experience with crafts prior to beginning our preschool just 8 weeks ago!  I used to see people make things & talk about things they made & even if they told me how they did it or what they did I could never understand.  Just the things they use (like "mod podge") have weird names & I've never heard of them, nor do I understand what they are for or what they do.  I used to love watching Martha Stewart & while I would use some of her recipes & loved watching her cook, when it came to crafting I was always in awe, but also clueless.

I know there have been times in the past when I wanted to try to do a project, but there would always be a step involved that went too far beyond my understanding & I would just give up (usually never get started because I would read all the way through & see the step I didn't understand & never even start!).

This particular project I decided to find a way to do, even though it was way beyond my understanding.  Every single step of this project had obstacles for me.  But I prayed & I persisted, mostly because I wanted soooo badly to make this for my son & hang it in his bedroom.  I've watched my hubby build so many things for our son.  And while that is wonderful it leaves me longing to craft things for him as well.  I am no wood worker like my hubby, that's for sure.  So I find it challenging to come up with ideas for what I can make for him by myself.

A lot of times when I'm trying to do something & I don't understand or know how to do it I'll run it by my hubby & he'll explain it better or help me.  This was one project that he couldn't help me with.  But in a way I'm glad, because that makes it completely from me.  It feels good to know that I did it all on my own.  Not in a prideful boasty way, just a sense of satisfaction that I rarely get to experience.   It has also built a craft confidence in me.  I now feel more adventurous when it comes to taking on crafts, which is a good thing for sure.

So the first step was to print out this woman's character cards that correlate with the curriculum I am using.  This was also obstacle number one as I couldn't open the files to print for some reason.  I left her a comment or emailed her or something (I can't remember exactly) & she ended up emailing me the files directly & I was then able to print.

Then I had to laminate the character cards!  I have no experience with this sort of thing at all.  Once again my old self was wanting to quit & walk away from this project, but I wanted to make it bad enough that I persisted.  I asked my hubby if he happened to have a laminator.  (He often has stuff like that & I don't know it cuz it's packed away somewhere)  He said he didn't have one, but to check Costco.com, they should have one.  I checked there & they had one for $100.  So we didn't have one & buying one was totally out of my reach.  I prayed & just a matter of days later one of the blogs I follow in regards to homeschooling listed school supply must-haves.  They had a laminator listed that was supposed to be good quality for less than $30.  I ended up getting it & then laminated my cards.

After this step I needed to get a 24 x 36" canvas, acrylic paint, mod podge, & an acrylic sealer.  Budget wise I had to wait a while to get to this step.  My laminated cards sat around for a while.

Finally I headed to Michael's & found a canvas, only to see that it was $65!!!!  There was no way I could afford to do this project at this rate.  My heart sank as I stood there contemplating what to do.  I prayed & then I noticed there were more canvasses with different labels on them.  I ended up finding one in the size I needed for around $18 (& with a coupon I ended up paying $8!!!), thank God!  I headed to the paint & looked at the blue shades but couldn't really find one that I loved, so I went with grey.  I felt it was a nice neutral shade & I happen to love grey.  Then I got the mod podge & the sealer.

First I laid out the cards on the canvas, to see how they would go & how they would fit.  I realized I had one card too many, so I had to decide which one to leave off. 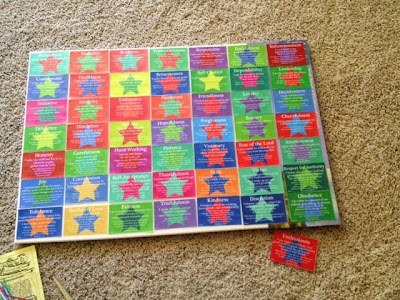 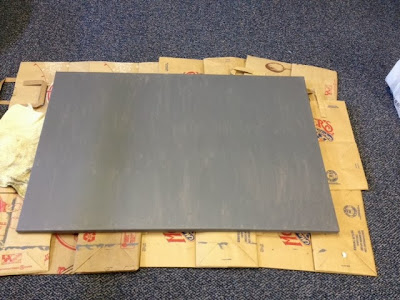 I had to put a layer of mod-podge on the paint & stick the cards into it.  I knew I needed to make sure I had the cards lined up properly both horizontally & vertically, so I did a row in both directions first. 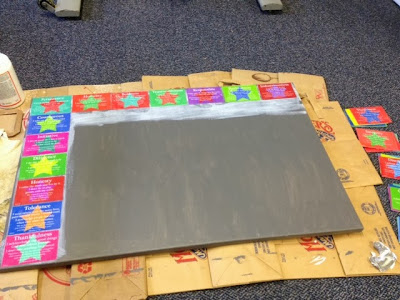 Then I filled in all the rest, putting mod-podge underneath them. 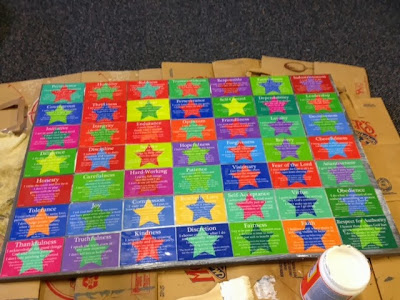 Then I was supposed to put a layer of mod-podge over them.  At this point I was totally convinced I had destroyed my project.  It was so cloudy white.   I was devastated but left it to dry, praying it would clear up as it dried. 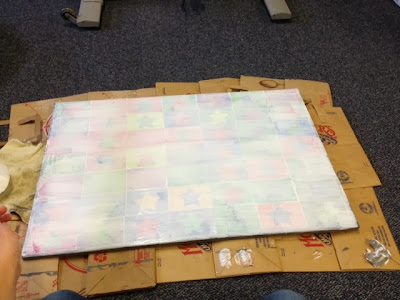 As I went back checking on it periodically I could finally see that it was clearing up!  God had heard my prayers!!  I was soooo relieved! 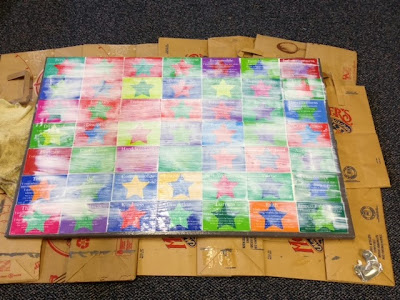 I did about 4 coats of mod-podge, allowing it to dry between each coat. 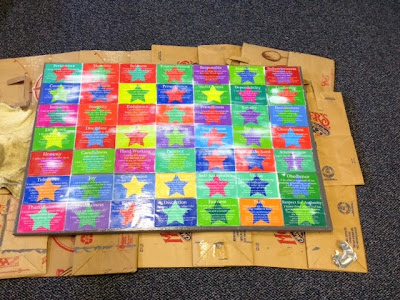 Once the mod-podge was completely dry I sprayed on the acrylic sealer.  I did about 4 coats of the sealer.  And this is the final product! 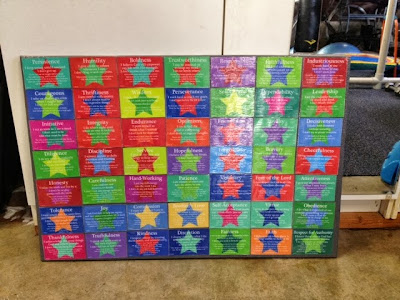 And at last, hung in Lil J's room, just where I had envisioned it the first time I set eyes on this project!! 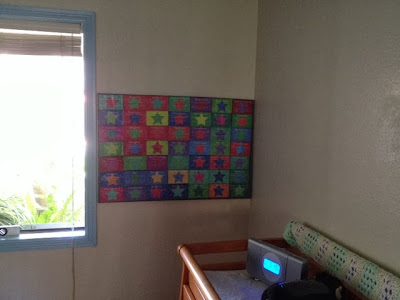 I think it balances out so nicely with the bulletin board since they are very nearly the same size. 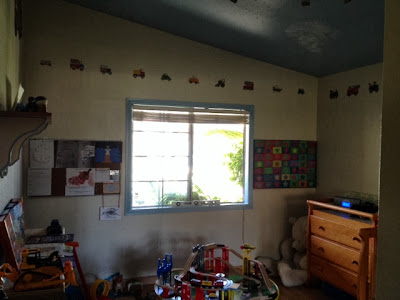 All in all I am also thrilled at learning new technique.  This is definitely a technique I will keep in mind for future possibilities.  Putting a paper of some sort onto a canvas.  Lots of possibilities there!!