I can't remember exactly when we revamped the fish tank, but it was sometime earlier this year.  After keeping freshwater fish for so many years I feel like I've seen it all, done it all, & was a little bored.  My hubby & I did some homework & we decided to do an African Cichlid tank.  I had kept convict cichlids before, but not Africans.  We got most of the fish from a wholesale store that is open to the public.  It's the same store I bought my 100 gallon tank from many years back.

When we were picking out fish I really liked this one, just his coloring really stood out to me.  African Cichlids are very colorful & while this one isn't as colorful as some others, I still really liked it.  While I was picking it out my son named it "Big Fella" & the name has stuck. At the time he was bigger than most of the fish we had purchased.  Now that a lot of our fish have grown quite a bit he's not so big anymore, but it's still his name, LOL.

Big Fella has become the boss of the tank.  And he is extremely intelligent & full of personality.  We have all come to love him as our favorite in the tank.   I had the fish tank prior to marrying my husband.  I brought the tank with me after we married & I moved in.  So for a long time it was sort of 'my thing'.  But my hubby has learned a lot over the years & he helps me a lot with it.  And in letting him landscape it & choose the fish, etc, he now feels like it's 'our thing'.  My hubby is now usually the one who feeds the fish.  And he loves it, he has taught them to eat out of his hand, nibble on his fingers, etc.  And Big Fella is at his cutest during feeding time.  BUT Big Fella knows when my hubby comes home & he will splash loudly to request food.  And while it's hard to explain in words, he interacts with us a lot.

On Tuesday of this week I walked through the living room into the hallway, passing the back of the tank, & heard a weird sound.  On Monday there had been a frog in our garage & for a moment I thought the frog had somehow gotten in the house, that's what it sounded like.  When I looked more closely I realized it was a fish, on the floor behind the tank.  I had been in the living room for some time & hadn't heard anything at all.  It was only when the fish saw me that he started making noise to get my attention.  I knew only Big Fella was that smart & I was correct.  I quickly got him back in the tank  & pulled him through the water in the net, in hopes to push water through his gills.  When I stopped & let him out of the net he simply fell to the bottom of the tank & lay there on his side.  He didn't look good at all.  And I was very worried that other fish would beat him up & kill him.  My son & I prayed for Big Fella.  And I kept a close eye on him all day.  Later he was sitting upright on top of a tank decoration.  He still looked weak, but better.  And later still he was hovering slightly above the tank decoration.  And then last night he was fully swimming around as if nothing ever happened.  And he still is this morning, thank God. 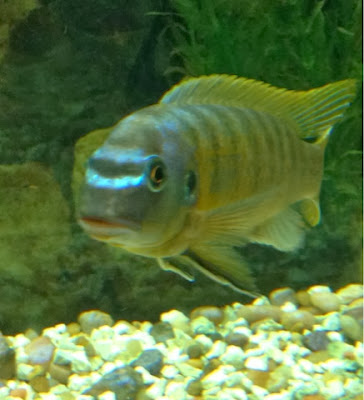 Many years ago I had a pleco.  I had bought him around 1999-2000ish when he was very young, very tiny.  And when he was bigger he had jumped out of the tank.  I'm not even sure how long he had been out for.  My brother had helped me get him back in & had told me how he once saw a show on TV where they were putting fish (sharks I think) back in water & they were pushing & pulling them through the water, to force the water through the gills.  So we did that, but he still looked terrible.  He just lay limply at the bottom of the tank.  And for many days he couldn't even suck himself to the glass.  He would try & just slide down to the bottom.  It was so sad.  But he did survive & lived many long years, though it took him a while to regain his strength & he always had a scar on his back.  He died a few years ago, in 2008, after there was a fire here in my community & our house suffered from smoke damage--6 houses surrounding ours burned badly, there was A LOT of smoke.  There was a mandatory evacuation & we couldn't even see or enter our house for a few days.  When we finally entered I found the pleco dead.  When I investigated further I found a layer of ash on top of the water in the tank, at least an inch thick.  And the filters had been clogged with ash & were no longer functioning.  I was so sad that I wasn't able to help him or save him.