I am using Heart of Dakota's Little Hands to Heaven, Teach Your Child to Read in 100 Easy Lessons, various forms of Spanish, & reading aloud from a chapter book for my 4 year old son.

This week focuses on the letter K & David.

We started off on Monday with a new fingerplay.  He read the sentences portion of reading lesson #87.  We read in the Bible about David.  We did a craft that was in the curriculum, with some sheep, clouds, flowers, & a river.  He practiced writing "K" & "k".  There was an activity to act out what we read in the Bible.  I've been skipping these type of activities more & more as time passes.  Part of me feels guilty, since it seems like it would make learning more fun.  BUT I did some pondering on this & I do believe I am making the right decision, as my kid just gets super distracted & unfocused & doesn't get much learning out of it when we do these activities.  So I think from now on I will continue to discuss these rather than act them out.  I just think it's the right decision for my kid/situation.  Then we did an extra craft, making a sheep, since David was a shepherd, watching over sheep & goats.  Then he read the sentences/paragraphs portion of his reading lesson, then we did some Spanish, & then music.  I don't think I'm going to have time today to read aloud.  Mondays have become insane with the swim lessons thrown into the mix......I think next month when I renew swim class I will have to move it to another day, as I already have tons of laundry & house cleaning on Mondays. 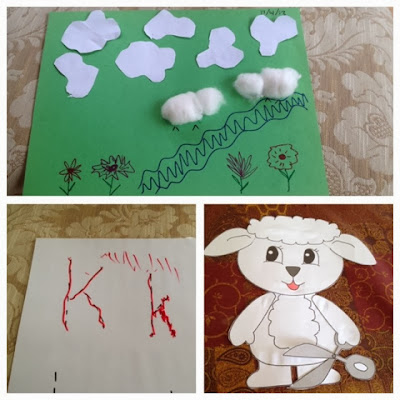 On Tuesday we continued with our fingerplay.  I made the big decision to skip reading for a little while, unless Lil J asks to do it.  It's just not going well at this point & I need to do some praying about this area of school, possibly leaving our current reading curriculum behind in the process.  (I honestly think at this point he is reading so well that we don't even need curriculum anymore we could just move to emerging reader books at this point I think)  So we read in the Bible about David & discussed what we read.  He did 'hide & seek K' & 'count on me'--drawing music notes (because David played music on his harp) & counting them.  Then we did Spanish & an extra craft, making a toilet paper roll sheep.  Then we listened to our songs--Psalms 23, books of the Bible, God made the universe, & 10 commandments.  Then I read aloud from the little house in the big woods.  And that's a wrap for Tuesday.  Lil J did mention that we skipped reading, but when I asked if he wanted to do it his response was "no thank you, maybe later".

On a side note, when we do our songs Lil J frequently appears to not be paying attention (this is frequent with lots of things actually, but if I question him I find that while he is very active & busy he is still listening) & I sometimes wonder if how much he's paying attention.  But on this day, without realizing, while I was singing God Made the Universe, I kinda wasn't paying attention & said the wrong thing--I think I said God made the fish & the birds on the 4th day rather than the 5th.  And in the midst of whatever he was doing Lil J snapped to attention & started correcting me.  It was a wonderful moment, because once again it proved that he really is listening & learning & retaining info. 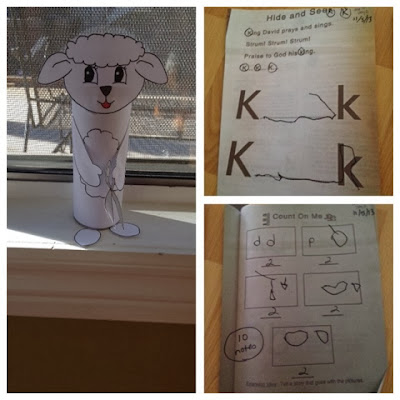 On Wednesday we continued with our fingerplay.  We read in the Bible about David & Goliath.  My son has been looking forward to (& constantly asking WHEN it was coming) for this Bible reading for some time now.  I think he will be covering it at church very soon, but at least we finally got to it in preschool.  He was very excited today for that.  Then there was a 'math activity' that had little to do with math & lots of activity, so I skipped it & just discussed the key idea of it instead.  It was 'masking tape K' day, which my son loves.  He had animals walk on the K.  Then there was a strange activity where he draws a shepherd's staff on one side of the page & 5 stones on the other side of the page & then draws lines from the stones to the bottom of the page.  The idea is that you draw the line to show that David hit Goliath with a stone & Goliath fell down dead.  This was kinda weird to me, we did do it, but did a lot of discussion after drawing this, because I didn't feel the activity conveyed the meaning at all.  On Tuesday I took Lil J to the library for the very first time.  I decided to see if he could/would want to read one of those books as his reading lesson.  He said yes & then tried to read "Frog & Toad Together", but after reading about 2 pages he said it was too hard.  So we did Spanish & then our songs--a song about David, books of the Bible, God made the universe, 10 commandments.  (Today while doing our songs Lil J announced he was going to dance, but instead sat on the couch looking at library books, but he was clearly listening all the while).  Then instead of reading Little House in the Big Woods I read Frog & Toad Together.  When we were all done Lil J started talking about skipping his reading lesson.  I asked if he wanted to do 100 Lessons & he said not today.  I asked if he wanted to read more of Frog & Toad & he said it was too hard.  But he ran & got his devotional & asked to read that.  So that's what we did & he loved it & did really well with it.  I was very pleased. 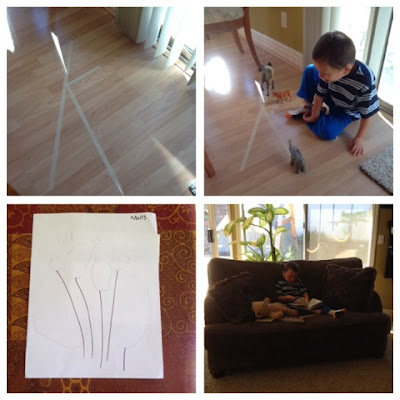 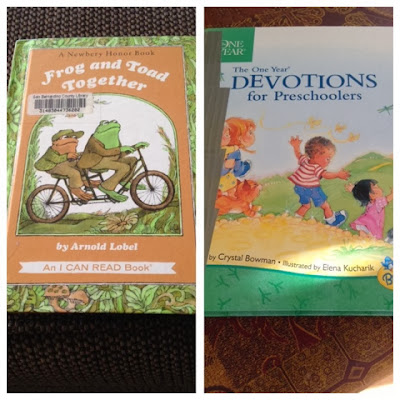 On Thursday we continued with our fingerplay.  We read about David & Jonathan in the Bible.  We did a lot of discussing about David & Jonathan's friendship (there were 2 activities that were to be acted out that I instead chose to discuss).  I was supposed to make a cotton ball "K" (or "cloud K" as Lil J would've called it) but I'm all out of cotton balls at the moment, so instead I just did a glitter glue "K" on black construction paper.  Lil J liked it a lot.  Lil J keeps pointing out that we haven't been doing reading lessons, but then when I ask if he wants to it's almost as if he gets fearful of it & always says "no thank you" or "maybe later" or some such response.  And when we read things that have words he doesn't know he gets very discouraged.  He is extremely smart & is able to read extremely well for his age.  I'm not sure what the issue is, BUT for today I pulled out the first set of early reader books I got at Costco a while back.  I had planned to start them when we finished the reading lesson book, but I wasn't planning on that being anytime soon.  But I'm really thinking it's time to just abandon this reading lesson book.  It served it's purpose well, but it's no longer doing so.  So when I pulled out this book Lil J was resisting & acting almost as if he believed he couldn't do it.  Luckily these books start out extremely simple & super easy & almost TOO easy for him.  But the look on his face when he realized he COULD do it was priceless.  I am hoping & praying that these books are just what we need right now.  Then we did Spanish.  Of his library books he chose Franklin & the Duckling as a read aloud book for this day.  And then we did our songs--a song about David, the books of the Bible, God made the universe, & 10 commandments.  While we did our songs he sat on the ottoman looking at one of his library books.  I must say it is amazing how much shorter our school time is without the reading lessons in the 100 lessons book.  Prayer that these Bob books early reader books work out well would be much appreciated. 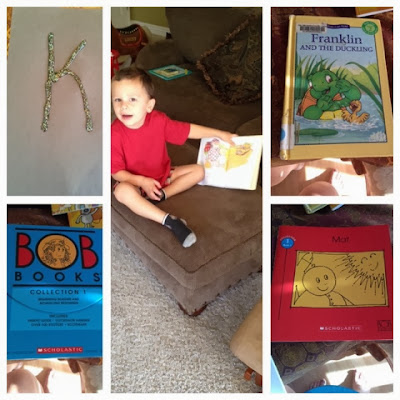 On Friday we continued with our fingerplay.  He read another of the Bob books.  We read about David not killing Saul in the Bible.  We did both devotionals.  He practiced writing "K" & "k" again.  We discussed the situation of Saul wanting to kill David & yet when David had the opportunity to kill Saul he didn't, because it wasn't pleasing to God (there was an activity here that I chose instead to discuss).  Then we did Spanish & then our songs.  There was no song for today's lesson, but we still did books of the Bible, God made the universe, & 10 commandments.  I now have the 10 commandments song memorized I am happy to report.  For read aloud time he wanted Freddy the Fire Engine.  It's a short one, so I'll probably read something else aloud later on today. 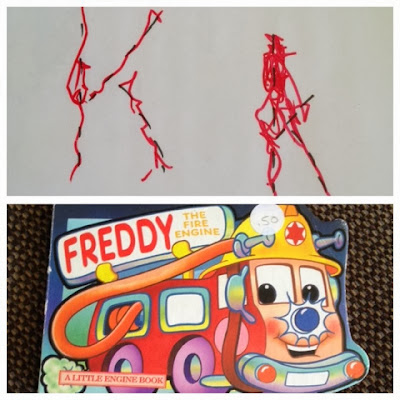