This week/unit focuses on the letter L & David.

This is the continuation of unit 14, since we only accomplished one day of the unit last week & then I got sick.  So on Tuesday we continued with our fingerplay.  We read about David bringing home the Ark of God in the Bible.  We had a craft in the curriculum where we made the Ark out of a small box.  (I used a mouthwash box)  This was 'masking tape L' day--which my son loves.  He had his little toy turtle walk all over the "L".  We were then supposed to dance around & sing praises to God carrying the Ark we made, but I decided to just incorporate that with our song time at the end of school time.  So we moved on to reading, he read another Bob book.  And then we did Spanish & then our songs--a song about Psalm 150, the books of the Bible, God made the universe, & the 10 commandments.  Later I will read aloud.

I had meant to do a craft on this day, but we didn't do it.  It was really cute, making David's harp.  But it just seemed like it wasn't meant to work out for us.  It had a lot of prep work involved, which I was working on 2 weeks ago, because we were supposed to be doing this school day last week.  And every step of the project had things go wrong for me.  And then I had needed to buy yarn, to make the strings of the harp, & it seems I never got around to doing that.....so I just decided today to just let this one go.  It's not the end of the world. 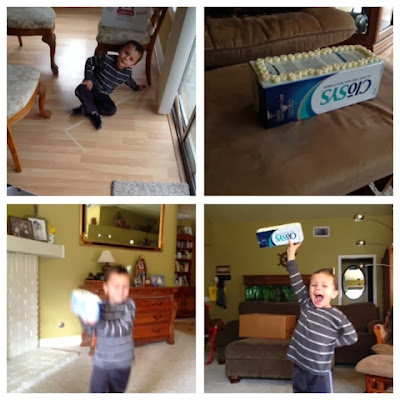 On Wednesday we continued with our fingerplay.  Then we read in the Bible about the prophet Nathan telling King David that God was going to punish him for his sins.  Then Lil J read a Bob book, he did really well.  He's really starting to gain the confidence he was lacking.  We did 'hide & seek L', which he's really good at.  We did a strange activity where I demonstrated on paper what he needed to do & he did his own version on his own paper.  We drew a yellow oval on the left side of the paper.  On the right side we wrote "NO" & below it we drew a sad face.  Then we connected a line from the word "NO" to the sad face.  As soon as we were done Lil J was asking me what it meant.  I have no idea what the yellow oval is about.  But the "NO" & sad face represent David's sin & David's sadness over his sin.  We skipped an activity, it just emphasized the same as the drawing & the Bible reading.  Then we did Spanish.  And then we did our songs.  There was no song scheduled for today, so we just did the books of the Bible, God made the universe, & 10 commandments.  Later I will read aloud. 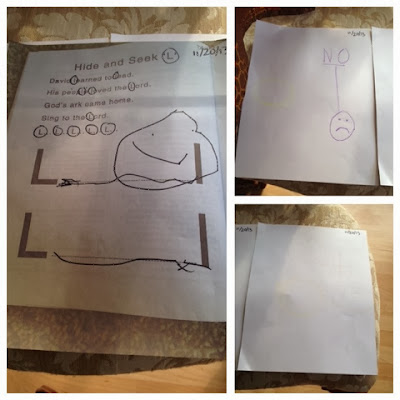 On Thursday it was raining & I struggled to get school started, just such a lazy comfy morning, but we did get going a little past 8AM & we continued with our fingerplay.  We read the same passage in the Bible again today, focusing more on God's forgiveness.  We did both devotionals for the letter L.  I drew an L on a paper & put glue on it.  Lil J stuck banana puffs on it.  We discussed how God wants men to respect women & examples of respect & the fact that David did not respect Bathsheba.  He read another Bob book.  We did Spanish & there was no song to go with today's lesson, but we still did books of the Bible, God made the universe, & 10 commandments.  Later I will read aloud. 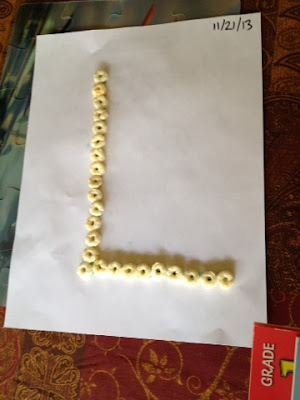 On Friday we finished off the week with our fingerplay.  We read about Absalom in the Bible.  He practiced writing "L" & "l".  He read another Bob book.  He is really enjoying the Bob books.  He seems to really like anything with characters & these books have that.  He looks forward to continuing with & learning more about the characters, just like with his devotional.  Then we did Spanish & then our songs--no song for today's lesson, so just books of the Bible, God made the universe, & 10 commandments.  Later I will read aloud. 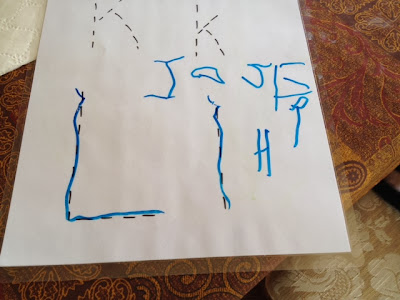 We will most likely take a break next week from school.  I have some Thanksgiving crafts to do, we always read the Squanto book, & I have lots of food prep to do.  So it will be a busy, busy week for sure.  Plus we are going RVing this weekend, so I can't get a head start on anything!